Hebrews 13:1-3
"Let brotherly love continue. Do not forget to entertain strangers, for by so doing some have unwittingly entertained angels. Remember the prisoners as if chained with them—those who are mistreated—since you yourselves are in the body also."

Though hard to define love is one of those things you immediately recognize when you experience it. The same is true of hate. Love is particularly easy to identify when it manifests itself in ways that are totally uncalled for, unexpected, and way outside the norm.
Jesus was known for this kind of love. Allow me to explain:
Religion sees love as a duty. Love is of course anything but a duty. It is the natural action that flows from a heart that wouldn't do anything less. In the culture of Jesus' day the 'duty' was defined as 'you must love your neighbour as yourself'. This left people trying to determine how obligated to their fellow man they were by the term 'neighbour'. One day a man came to Jesus with the question "Who is my neighbour?" What he was really asking was "How far does my care for others have to extend?"
Rather than answer the question using a definition Jesus told the following story:
Luke 10:30-37 "Jesus replied, “A man was going down from Jerusalem to Jericho, and he fell among robbers, who stripped him and beat him and departed, leaving him half dead. 31 Now by chance a priest was going down that road, and when he saw him he passed by on the other side. 32 So likewise a Levite, when he came to the place and saw him, passed by on the other side.33 But a Samaritan, as he journeyed, came to where he was, and when he saw him, he had compassion. 34 He went to him and bound up his wounds, pouring on oil and wine. Then he set him on his own animal and brought him to an inn and took care of him. 35 And the next day he took out two denarii and gave them to the innkeeper, saying, ‘Take care of him, and whatever more you spend, I will repay you when I come back.’ 36 Which of these three, do you think, proved to be a neighbor to the man who fell among the robbers?” 37 He said, “The one who showed him mercy.” 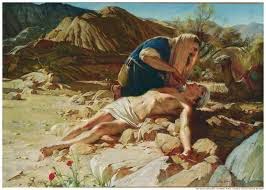 My point today is not to define who our neighbour is. The point is clear. Any man, woman, or child regardless of race, colour, language, or beliefs is our neighbour.
My point is quite different. I will never forget as a university student walking down a street in Edmonton with a friend. As we walked we past by a man who was clearly in bad shape and I immediately felt impressed to give him some money. In my pocket was a loonie ($1) and a $10 bill. I gave the man the loonie and wished him well. My friend later remarked that he was touched by how I treated the man. The truth is I only felt regret because I felt impressed to give him the $10 also but resisted.
Contrast that with Jesus. I was put on the spot by coming upon on man in need by chance. His very presence was an unexpected interruption in my plans. However in John 5 we find Jesus helping a sick man, a complete stranger. The crazy part of the story though is that the man didn't seek out Jesus, nor did Jesus and he cross paths by chance like I did with the man in Edmonton. Jesus went into the midst of people in need on purpose. He went out of His way to go to them. In the story He told three men by chance came upon the robbery victim. One showed love by helping him but Jesus went out if His way to find people who needed love.
Genuine love is not an obligation or a duty. That kind of "love" is actually selfish. Love is a force inside a man that be restrained in the face of human need. Where does such compassion begin? It begins by considering Him. Do it Today.