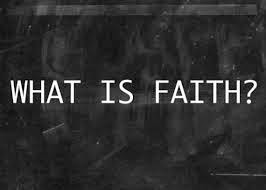 There are two terms that need to defined in these opening verses of chapter 1 - Gospel and faith.
You don't have to read very far or know anything about what you are reading to figure out that Jesus is the central figure of what Paul is talking about. The Gospel as we will see in increasing depth is the story of all that Jesus has done, is doing, and will do for humanity....

Faith is an interesting word. It is even more interesting when we consider the life story of Paul. The root meaning of the Greek word (pistis) that we translate as faith has to do with being persuaded. Hebrews mentioned several times the "hardness of our hearts" and said in chapter 3 that the Israelites in the wilderness had evil hearts of unbelief (apistias). The "a" means opposite of: an evil heart that is against belief or against faith or literally a heart that won't be persuaded.
Paul was originally known as Saul. He was a passionate Jew. He was highly educated. He was well traveled. He was entirely against this new religion called "the Way" which he saw as a bunch of ignorant uneducated people following a dead man from a deadbeat town. The rapid growth of the movement he saw as an annoying and even dangerous pestilence that had to be stopped. Much like ISIS trying to exterminate Christianity from certain Muslim countries now, Saul (Paul) joined an extermination movement back then to rid the land of these heretical followers of "the Way".
In Acts 6 and 7 we find Stephen, a deacon in the church, a follower of Jesus, the Way on trial before the Jewish council for his "heretical" beliefs. Stephen explains to them from their own Scriptures that Jesus is their Messiah. When Stephen gets to the heart of his message about Jesus the council rushes at him in a mob like frenzy and takes him out to stone him. Saul is there and holds the coats of some who are throwing the stones while Stephen is murdered by them.
Why? Because Saul was not yet persuaded. He still had an evil heart of unbelief (unpersuadeableness). Later on by God's direct intervention in his life Saul became persuaded and went from a murderer of Christ followers to one of, if not the most passionate Christ follower the world has ever known. He became completely persuaded. In the language of Christianity he became a man of faith. Now his life became dedicated to sharing his persuaded heart with others in the hope that they would be persuaded also.
This is the reason he wants to go to Rome. He wants to help the persuaded ones there become more persuaded and more importantly he wants to persuade others by preaching the Gospel. He wants to tell them the good news of who Jesus the Christ is, what He has done, is doing, and will do to rescue us from the mess we're in.
I too am persuaded. I too do the things I do in the hope that some who are now unpersuaded will become persuaded.
See you tomorrow as we dive deeper into all the reasons we should all be persuaded.
Posted by Pastor Dan at 22:04