Do We Know Our Father?

Romans 1:16,17 "For I am not ashamed of the gospel of Christ, for it is the power of God to salvation for everyone who believes, for the Jew first and also for the Greek. For in it the righteousness of God is revealed from faith to faith; as it is written, “The just shall live by faith.”"

I need to warn you now that what I'm going to write about today gets me in trouble but it is the truth as I understand it.
Jesus was perfect. If He wasn't there is no good news. The entire Gospel story hinges on the perfection of Jesus. He is the Lamb of God that takes away the sin of the world and the Lamb had to be without spot or blemish.
Jesus was perfect yet He was accused of being less than perfect on several occasions. He was accused of everything from being a drunk to blasphemy. So persuaded were the people in Jerusalem that He was anything but perfect that they cried "Crucify him, crucify him!" 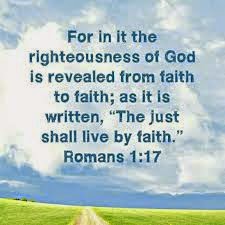 In verse 16 Paul says he is not ashamed of the gospel and then in verse 17 he says "For in it (in the gospel) the righteousness of God is revealed from faith to faith."
What Paul is saying is that if you discover the gospel story your view of God and Christ will change. You will begin to understand what He is truly like and what perfection really looks like and what truth really is. Your false ideas about Him will begin to be stripped away.
"From faith to faith" means you will become more and more persuaded about who He is and your confidence in Him will increase and increase.
Then Paul quotes the Old Testament and says "As it is written "The just will live by faith"" Faith is what we lack. We are not convinced about Who God really is and what He is really like and when we are fully persuaded we will follow Him perfectly.
Let me illustrate with a true story:
Father, mother and son. Parents split up and dad leaves. Son is devastated. Mother tells him dad doesn't love them any more and he is never coming back. The son hopes that isn't true but days and weeks and months and birthdays and holidays and years pass and he never sees or hears from his dad.
Many years later the son now hates his father and as his life goes on he falls in love. The girl he falls in love with learns about the MIA father. She determines that this broken relationship needs to be mended. She wants no part of starting a family with the son in this kind of situation. She tells him he needs to find his dad and try and make things better before she will marry him. Persuaded it won't work but not wanting to lose her he tracks his dad down and they arrange to meet. They sit through an awkward meal at a restaurant where little is said. The son can't wait for it to be over and leaves satisfied he has fulfilled her requirements. She is not satisfied. She tells him he needs to try again and this time find out what went wrong all those years ago and where he has been.
Unannounced he goes to his father's house. After some uncomfortable silence in the living room he finally just blurts out "Where have you been? Birthdays, holidays, graduations, nothing. You acted like I was dead. Why?!!!"
Without saying a word the father stands and disappears down the hallway into a bedroom and returns with a large box that he sets down on the floor in front of his son. He then turns and goes to get another one.
The son in bewilderment opens the box. Inside are cards and letters and unopened gifts. All were addressed to him and all were returned.
Suddenly his whole picture of his father was turned upside down. Sadly so was his picture of his mother...
We live in a world where God and His people are split up. Each of us has an opinion of what God is like that has been shaped by our culture, our parents and family, and by religion.
Remember it was the church that taught about God and claimed to be the only true religion that crucified Jesus. It was the church leaders that slandered Jesus' character and misrepresented God just as that mother misrepresented the father to their son.
The truth came out and the character of his dad was revealed and he became persuaded of his father's love. As their relationship grew he became more and more persuaded.
Tomorrow we'll go deeper and I will explain why this subject gets me in trouble...
Posted by Pastor Dan at 11:34