The unavoidable has come. I am not ashamed. I am not ashamed because Truth is the only antidote to our spiraling culture.
Ancient Rome as we discussed fell apart. It was not destroyed in an epic battle or wiped out by an unstoppable plague. Historians can't put a finger on exactly what went wrong. The reason is because Rome died from within.
As a pastor for over 15 years I have seen marriages die. When the autopsy is done to determine the cause it is almost alwa...ys the same. Marriages die of neglect. Each partner stops cherishing the other person. They put energy and give attention to anything and everything but each other. The final straw may be an affair or some other visible dramatic tragedy but peel away the drama and you most often find chronic years of increasing neglect. 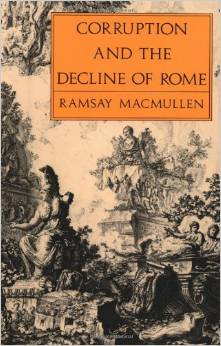 Rome suffered from neglect. As generations past they neglected the principles and morals that had made them strong in the beginning. Principles and morals like hard work, honesty, integrity, faithfulness, respect, family values, sexual morality etc...
Again Rome did not fall from external forces. Rome imploded over decades.
Paul is writing while Rome is still standing but the empire is beginning to show cracks. The elements that will eventually lead to its demise are in place and Paul outlines them with a clarity that is prophetic.
Step One in personal or national demise is to know what is good and right and true yet suppress it, ignore it, and do anything and everything to prevent the truth from being known. The first One to be suppressed and ignored is God. We cannot deny that we live in a culture that gives God credit and thanks for almost nothing yet when tragedy strikes the majority cries out "Where is God?!" The twin tower disaster of 9/11 is a text book example. For a few weeks churches filled up and then back to ignoring God as usual. Verse 21 is key: although they knew God they did not give Him glory or thanks...

Step Two in the process of self destruction is the inevitable dumbing down of society as we get further and further from God, the source of all wisdom and enlightenment. All you have to do is trace academic scores in recent generations in America to see this is very real. Of course the downward trend happens so gradually that many don't notice and others try and deny it. Like gaining or losing weight it is those who see us less often that notice the changes. Rome paid large sums of money to build the Jewish temple precisely because they knew history and the power of the One True God. America today is on the downhill slope towards inevitable trouble primarily because America has chosen to forget God and the principles and morals that built that country from nothing to the world super power.

As we continue to trace Paul's words in Romans 1 we will see just how prophetic they were... see you tomorrow.
Posted by Pastor Dan at 20:51