Let's trace the context again quickly just to make sure we are clear on where Paul is coming from. He has a passion for sharing the gospel: the good news about what Jesus has done, is doing, and will do for humanity. He wants to go to Rome to share the gospel but God has not asked him to do that yet. Then he states "I am not ashamed of the gospel..." and he clearly says why. "It is the power of God for deliverance for everyone who believes".
Following his declaration Paul transitions to how others are handling the gospel. As we talked about 2 days ago the first step for those who are ashamed of (or worse) are enemies of the gospel was to suppress the truth. Throughout history from book burnings, to censorship, to murder, men have always tried to suppress and silence the voices they didn't want to hear. It starts with Cain killing Abel and it has never stopped. Ultimately the Voice they are trying to silence is the voice of God. As His Voice and His character and His wisdom are removed from a society the 2nd thing we find is a dumbing down of that society.
Step 3 is not a wholesale rejection of God but rather a redefining of God. The Bible calls this idolatry. Sometimes idolatry begins with using images to represent God. This has happened countless times in history and is happening still in many parts of the world. The inevitable result of using an image to represent God is our thinking less of Him. How can the true God who knows all, sees all, and has limitless power be captured by an image? He can't be. So rather than the image capturing all that He is, our concept of Him is limited by what the image is. We have no true understanding of the damage done inside our minds by trying to use images of much lesser things to represent Him.

In our culture we don't do this. We have a more "sophisticated" form of idol worship. We worship our ideas. Make no mistake. The Israelites did not build a golden calf because they believed the image was God. They built a golden calf because they knew it could be controlled by them and wouldn't oppose their ideas. Moses was trouble to them. He was not open to their ideas. He only did what God asked him to do. They hated going one way under the leadership of God through Moses when they really wanted to go a different way. When it seemed Moses was dead they seized the opportunity to make an inanimate leader so they could go wherever they wanted without argument.

Think about our society today. The theory of evolution was birthed by a preachers son seeking freedom from religion, from the leadership of God. By explaining away our origins through a method that requires no God we become free to go our own way and evolve into whatever we choose. We trumpet this godless freedom as enlightenment and now new age as taken the "enlightenment" a step further and claims we are all gods. 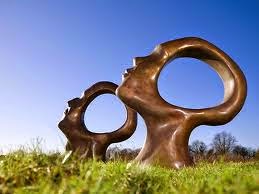 Our enlightenment claims whimsical things like we can all have our own path and whatever is good for you is true for you and whatever is true for you is good for you. There are no absolutes. Rules and moral law are only human constructs and can easily be changed without consequence. Love is what we need more of and love is defined as no rules, no judgments, no limits.

We have become a generation of rebellious children wanting all the benefits of our parents affluence but no input from them and no limits put on us. We judge God and truth by our own thoughts and feelings rather than judge our thoughts and feelings by our all knowing God. "Thinking themselves wise they have become fools". This is not an experiment that hasn't been tried before. Ask ancient Egypt how it ended for them? Ask Greece and Rome. Ask France how it went for them when they deposed God and exalted reason.

The reason there are so many different religions is not because God has multiple personalities or because His Word is hard to understand. It is because we all want our own way. Each religion is a golden calf. God says "rebellion is as the sin of witchcraft".

The irony is we kick and scream and oppose others to achieve a freedom we already have. God has given us this life to do with it as we please, believe as we wish, and behave as we choose. Israel didn't have to follow Moses. They were free to stay in Egypt. You too are free. Free to embrace God’s love expressed through the sacrificial life of Jesus or you can walk away. I am not ashamed of Jesus. He is the power in my life that has set me free to live and love and serve. I wouldn't trade Him for anything.
See you tomorrow...
Posted by Pastor Dan at 09:21