Living On the Outside

What we are going to talk about today is equal parts incredible and beautiful and is the final nail that seals the argument against those wanting to return and be Jewish again. Let me start with a story:
There was once a little boy who like so many little boys struggled to obey. His father, running out of ideas told his son that if he misbehaved one more time on this particular evening he would have to sleep in the attic. Of course the boy failed and the conseq...uence was enacted. The boy pleaded not to be sent to the attic but his dad knew it would be far more destructive to remove the consequence than to endure the pleading.
As the father lay in his bed the cries of his son coming from the attic broke his heart. He got up and decided what had to be done. He went to the hall closet and grabbed his sleeping bag, climbed the ladder to the attic and laid down beside his crying boy to endure his punishment with him. If he couldn't allow his son back in the house with the family then he would go suffer with him.
Now consider these verses: 11"For the bodies of those animals whose blood is brought into the holy places by the high priest as a sacrifice for sin are burned outside the camp. 12 So Jesus also suffered outside the gate in order to sanctify the people through his own blood. 13 Therefore let us go to him outside the camp and bear the reproach he endured. 14 For here we have no lasting city, but we seek the city that is to come. 15 Through him then let us continually offer up a sacrifice of praise to God, that is, the fruit of lips that acknowledge his name. 16 Do not neglect to do good and to share what you have, for such sacrifices are pleasing to God." 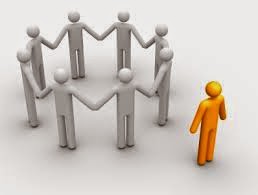 Jesus came to the Jews. He was born from them, lived and worked among them. In the end they rejected Him and crucified Him outside the city. As the disciples preached afterward the meaning of all that had happened and explained that Jesus was the Lamb of God that takes away the sins of the world some believed and followed Him. However the Jews as a people rejected Him forcing His followers "outside the camp".
To follow Jesus is to be an outsider. "We have no lasting city here for we seek the city that is to come".
If you feel you don't fit in this world it's because you don't. We live on the outside and we wait... He will come.
Posted by Pastor Dan at 08:03