Looking up from the floor with panic in his eyes Einstein replied "You don't understand. I need that ticket. Without it I don't know where to get off!"
Picking up from where we left off yesterday Paul had contrasted grace with wages. Wages are earned and they must be paid when the worker has earned them. Grace can't be earned. No amount of doing good today will erase my bad yesterdays. Grace is necessary and grace is not wages. Paul continues with words from David, the great Old Testament king and the boy who killed Goliath.
Romans 4:6 "David also describes the blessedness of the man to whom God imputes righteousness apart from works:
7 “Blessed are those whose lawless deeds are forgiven,
And whose sins are covered;
8 Blessed is the man to whom the Lord shall not impute sin.”
9 Does this blessedness then come upon the circumcised only, or upon the uncircumcised also? For we say that faith was accounted to Abraham for righteousness. 10 How then was it accounted? While he was circumcised, or uncircumcised? Not while circumcised, but while uncircumcised. 11 And he received the sign of circumcision, a seal of the righteousness of the faith which he had while still uncircumcised, that he might be the father of all those who believe, though they are uncircumcised, that righteousness might be imputed to them also, 12 and the father of circumcision to those who not only are of the circumcision, but who also walk in the steps of the faith which our father Abraham had while still uncircumcised."
See David says we are blessed not because we were good but because God didn't count the bad stuff against us. In Jesus we were forgiven. We didn't earn the forgiveness, Jesus earned it.
Then Paul asks "Who is this forgiveness for, the circumcised only?" Paul is continuing to tear apart the thinking that there is only a special class who will be forgiven and receive grace and be invited into God's eternal kingdom. For generations the Jews were taught that they were the special ones and God's favour was only for them and it was theirs by birthright. They didn't even really feel they needed grace. They had earned His favour simply by being born Jewish. They were of the circumcised ones. 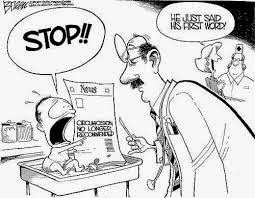 What is all this talk of circumcision anyway? Circumcision was instituted for males by God to Abraham to mark the family line through which Jesus would come. That is why Paul in many places writes that now circumcision has no purpose or value. Circumcision was another sign pointing to Jesus. You don't keep studying the map after you have arrived at your destination. You turn the GPS off and go enjoy whatever event you were driving to. So with circumcision. It pointed to Jesus coming from Abraham's line and He has long ago arrived.
Paul has a greater point though. He points out that circumcision can't be the ticket to acquiring God's favour as the Jews mistakenly believed it was. Why? Because Abraham through believing God’s promise was called righteous by God before he was ever circumcised.
Let's face it. We can't earn or buy what has already been paid in full by His Son. If you are still trying to find a ticket you don't know where you are going...

See you tomorrow
Posted by Pastor Dan at 09:26