So last Thursday I had lunch in Las Vegas where the sun was shining and it was 25 degrees celcius or 77 Fahrenheit. This morning I'm thrilled because it has warmed up to -5C. Always something to be thankful for. :)
On my way to the airport last week to fly home I was sitting next to a stranger but we had something in common. We were both leaving SEMA, the massive automotive trade show where we had been all week. We started talking and I asked him what brought him to SEMA. He told me he was developing an aftermarket part for trucks and he came to SEMA to find out if there was anything being offered that was similar to his product or would be competition for it. He was quite thrilled that there was not.
I of course out of curiosity asked him what it was he was working on. He wouldn't tell me. He wouldn't take the chance that I'd take his idea and beat him to the market with it or become unwanted competition. He knew the answer to the question I asked but he would not tell me the answer.
Romans 1:18,19 reveals the fact there are people who know about God and His righteousness but they act as though they don't and they suppress anyone who tries to make Him known. 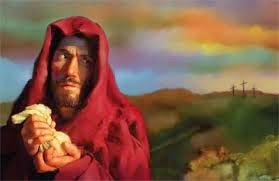 The Gospel is good news but not for everyone. I remember how shocked I was when this reality first hit me. I was studying through the life of Judas, the disciple that betrayed Jesus with a kiss, sold Him out for some silver, and later committed suicide. I was trying to figure out why he didn't just seek forgiveness like Peter and the others. They all messed up. They all denied him. Why the tragic difference? God boldly declares that He won't turn anyone away that comes to Him. He promises any and all sin can be forgiven if confessed.
Judas walked with Jesus for 3+ years. He knew Jesus would forgive anyone for anything. Why didn't he seek forgiveness and make things right between them?
Then the sad reality struck me. He didn't want to. He didn't want to for the same reason satan rebelled in the first place. He didn't for the same reason religious people today who know the truth about God hide that truth and teach something else.
Judas was not interested in the kingdom Jesus came to create. When Judas finally realized what Jesus was about and what His kingdom would be Judas sold Him out and bailed.
A kingdom of mercy, love, equality, service for others - a kingdom where the greatest leaders are the greatest servants of others - this was not what Judas signed up for. Judas had been raised in the synagogue (church) to believe in a very different kind of kingdom. A kingdom where some were elevated above others. A kingdom where there were winners and losers. A kingdom where the least existed to serve the great. A kingdom of selfishness and oppression. Judas was hoping he could ride the "Jesus bandwagon" to the top so that when Jesus finally revealed Himself as the new all powerful king of Judah, Judas would be His right hand man. When Judas realized there would never be such a kingdom he bailed. Tortured between the reality of what he did and the reality that the kingdom he truly wanted would never exist he killed himself.
Tragic.
Many atheists and observers of history note that most wars and bloodshed occurred in the name of religion. It is a fact. However it is equally true that the only blood shed by Jesus was His own. He is the king of a drastically different kind of kingdom. The government is on His shoulders and He carries His kingdom. Some men know the truth and they deny it with every fibre of their being in order to preserve their own pseudo kingdoms.
Where are you and I in all this? Are we suppressing or liberating? Are we serving or seeking more for ourselves. Which King and which kingdom do we love?
See you tomorrow...
Posted by Pastor Dan at 09:25