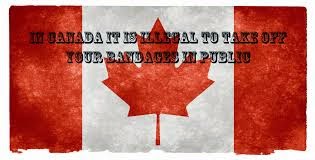 Once I was in a hurry (that never happens... ) and I got stuck in a long check out line. When there was finally only one person left in front of me she pulled out a bag of change and literally dumped it on the counter. Pennies, nickels, dimes, and quarters sat in a mixed up pile. Not a loonie or toonie in sight. The cashier and I glanced at each other in disbelief as the lady slowly began to count out the mass of coins in order to pay for her purchase. Perhaps in heaven I'll discover that she was used to delay me and that delay saved me from disaster or death. Maybe she was just an eccentric old woman. Either way I remember thinking at the time "There should be a law against this." Well it turns out that there is. In Canada according to the currency act you can't buy anything costing $5 or more with nickels. The limit for loonies is a $25 purchase. In Petrolia, ON it is illegal to yell, shout, scream, whistle, or sing in the streets at any time of day or night.
Want to know some other bizarre Canadian laws? In Souris PEI it is illegal to make a snowman more than 30 inches high. In Canada it is illegal to own, sell, distribute, or have in your possession a comic that is crime themed. No Batman for us. In Canada it was also illegal in many places to hang a clothesline to dry your clothes. Who knew? That law has changed in the name of "going green" for the whole country.
You can be sure that behind every bizarre law there is a story. You can be almost certain that the person who initiated the currency act forbidding using too many coins to make a single purchase was stuck in line like I was once and decided the nonsense had to stop.
My money says that at one time in Petrolia ON a local citizen was either over the top loud or a local citizen was over the top cranky and couldn't stand to hear someone else expressing themselves vocally. Either way you can be guaranteed there is a story behind that law and every other strange law.
What is my point? Laws are reactionary. They are written to prevent the reoccurence of something someone didn't like. They don't work. At best laws give those in authority the right to implement consequences against those who break them. Speeding is a prime example of the powerlessness of laws. They do not stop "bad" behaviour.

Romans 3 talks a lot about "the law". Essentially he is saying that the law can't make you right with God or make you a good person. The law (like an X ray machine) only exposes the fact we are broken. We have all sinned and fallen short of God's perfect character which is His glory. Law breakers aren't changed by more laws or by hammering them repeatedly with existing laws. In my experience few people need to be told they aren't perfect. 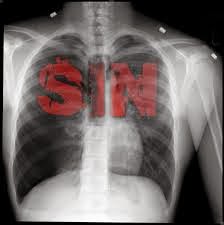 Paul says it is something else altogether that makes us right with God - faith. Faith in two things. Faith that we are washed and forgiven by Jesus and faith that by following Him, He can and will fix our brokenness. The law describes how we should not be but only Jesus can make us into what we are meant to be.
We'll discover more about all of this as Romans continues. See you tomorrow.
Posted by Pastor Dan at 09:41