Now Paul is going to reveal what happens after this systematic denying of truth and redefining of God into our own preferred image:


Romans 1:24 "Therefore God also gave them up to uncleanness, in the lusts of their hearts, to dishonor their bodies among themselves, 25 who exchanged the truth of God for the lie, and worshiped and served the creature rather than the Creator, who is blessed forever. Amen.
26 For this reason God gave them up to vile passions. For even their women exchanged the natural use for what is against nature. 27 Likewise also the men, leaving the natural use of the woman, burned in their lust for one another, men with men committing what is shameful, and receiving in themselves the penalty of their error which was due.
28 And even as they did not like to retain God in their knowledge, God gave them over to a debased mind, to do those things which are not fitting; 29 being filled with all unrighteousness, sexual immorality, wickedness, covetousness, maliciousness; full of envy, murder, strife, deceit, evil-mindedness; they are whisperers, 30 backbiters, haters of God, violent, proud, boasters, inventors of evil things, disobedient to parents, 31 undiscerning, untrustworthy, unloving, unforgiving, unmerciful; 32 who, knowing the righteous judgment of God, that those who practice such things are deserving of death, not only do the same but also approve of those who practice them.
Romans 2:1Therefore you are inexcusable, O man, whoever you are who judge, for in whatever you judge another you condemn yourself; for you who judge practice the same things..."
Now you know why I said the chapter break from Romans 1 to Romans 2 must be ignored. Romans 2:1 is directly linked to step by step outline Paul just went through of how we go from clear thinking God worshipping people to blind fools who are a threat to ourselves and everyone around us.
I know that sounds harsh but the reality is no one becomes out of control in a day or by one decision. The path that leads to a life that is out of control is a step by step denial of God, denial or right and wrong, denial of conscience etc... To feel better about ourselves as we head the wrong way we start to rationalize and redefine "truth". We label and attack anyone who tries to disagree with us. We surround ourselves with like minded people. We convince ourselves that we are becoming more free, more enlightened, more our true selves.
As we go down this path there comes a tipping point. A point at which God says "If that is what you really want and what you are determined to do then I will respect your choice and your freedom".
The Bible faithfully records many instances when His people wanted the opposite of what was good for them and each time He warned them of the dangers and then allowed them to do as they chose. Never did their rebellion end well.
I know homosexuality is a huge sensitive topic. Frankly I see two sides and can't stand comfortably on either one. It is critical at this point to make it clear that our increasing sexual deviance is a byproduct, not the cause of our condition. God essentially says "Because you have rejected Me, this is what will happen" Then in chapter 2:1 he says to those of us who aren't necessarily struggling with homosexuality "Don't judge them because you do the same things."

I must admit and confess that the first time I truly processed this passage of Scripture I was angry and offended. How dare God accuse me of being like them?!!! It's been a long humbling road since then. Now I know exactly what He is saying to me. He is saying sexuality is a desire. The twisting of sexuality into other forms is a desire that He did not create. It is a byproduct of human rebellion. The human heart wants to satisfy every desire it has. Every time I satisfy a desire that did not come from God I am as guilty as anyone else. It's easy and highly hypocritical of me to satisfy my desire to sleep with my secretary and then condemn my neighbour when he satisfies his homosexual desires. 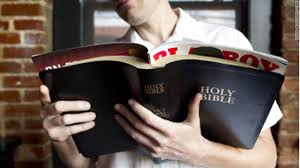 Human nature is to villainize those who struggle and sin differently than I do. We especially villainize those who are in a visible minority. God is clear. Don't judge them because you are no different...
When we head down a path of denying God and suppressing truth we have no real concept of where it will lead. To get a glimpse we can look at history. Just research the sexual deviance of ancient Rome...
When we play with desires that didn't come from God we are playing with the devil and we won't win. There is help and hope and healing for all of us. It's time to stop judging each other and start helping each other find freedom through the Gospel. More tomorrow...

http://ynaija.com/former-lesbian-says-pastors-must-talk-ab…/
Posted by Pastor Dan at 10:11