I wish I had maps to make this more "alive" but you'll just have to use your imagination or crack out your own. This one will give you a general overview. 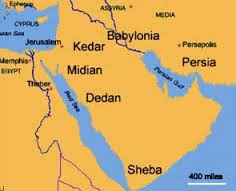 So Abraham married again and had more sons. He taught them the gospel. He explained God would send His own Son born through Isaac's line and that He would be the Lamb of God that would take away the sin of the world.
Those sons moved eastward and taught their sons the Story. Generation after generation the story was passed on. Midian moved east and south into what is today Saudi Arabia. Sheba moved further south and east to what is today Yemen and Ethiopia.
So long and so far separated by time and space that the family of Isaac became the Israelite nation and the nations built through the other sons came to be seen as foreigners and even heathens.
There were points in history where their paths crossed. When Moses fled Egypt he went to Midian. There he met Jethro and his daughters. They were still worshipping the God of Abraham. When the Israelites were traveling from Egypt to the Promised land they came to Moab. The king of Moab summoned Balaam who was another descendant of Abraham living in the north east and he was a prophet of the One True God. When he came he made this amazing prophecy: "I see Him but not now. I behold Him but not near. Behold a star will arise over Jacob and a scepter out of Israel."
Jacob was the son of Isaac, the grandson of Abraham and the father of what was becoming at that time the nation of Israel.
Many years later the Queen of Sheba came all the way to Israel to seek out king Solomon and question him about the God of Abraham. Historians estimate her trip with her entourage was 5-7 years each way!
Now fast forward a few hundred years to the prophet Isaiah. He made the following prophecy about 730 years before Jesus was born. Buckle your seatbelts:
Isaiah 60:
1 "Arise, shine;
For your light has come!
And the glory of the Lord is risen upon you.
2 For behold, the darkness shall cover the earth,
And deep darkness the people;
But the Lord will arise over you,
And His glory will be seen upon you.
3 The Gentiles shall come to your light,
And kings to the brightness of your rising.


4 “Lift up your eyes all around, and see:
They all gather together, they come to you;
Your sons shall come from afar,
And your daughters shall be nursed at your side.
5 Then you shall see and become radiant,
And your heart shall swell with joy;
Because the abundance of the sea shall be turned to you,
The wealth of the Gentiles shall come to you.
6 The multitude of camels shall cover your land,
The dromedaries of Midian and Ephah;
All those from Sheba shall come;
They shall bring gold and incense,
And they shall proclaim the praises of the Lord."


The period of time from when Abraham sent his sons eastward to the birth of Jesus was approximately 2000 years. From Isaiah to the birth of Jesus was about 730 years.
What did Isaiah write? Gentile (foreign) kings would come to the light. Jesus is the Light of the world. Isaiah calls these kings "sons from afar". Isaiah said where they would come from - Midian, Ephah, and Sheba. He said how they would come - by camel - so many that they would "cover the land." He even said what they would bring - gold and incense.
Much nonsense has been written about these wise men calling them astrologers and magi(cians). What did the wise men say when they arrived in Jerusalem to inquire of King Herod?
2 "Now after Jesus was born in Bethlehem of Judea in the days of Herod the king, behold, wise men from the East came to Jerusalem, 2 saying, “Where is He who has been born King of the Jews? For we have seen His star in the East and have come to worship Him.”"
They knew exactly why they had come and Who they had come to see and Who He would become. Gold they brought because it was the appropriate gift for a king just as Sheba had brought gold to Solomon many years before. They brought incense because they knew He would also be a Priest. They brought myrrh because they knew He would die as the great Ram just as on Mount Moriah 2000 years earlier the ram took Isaac's place.
The Bible is one Story. All of humanity is connected by it. Those who follow the Story are called wise men and now 2000 years after all these things wise men still seek Him. 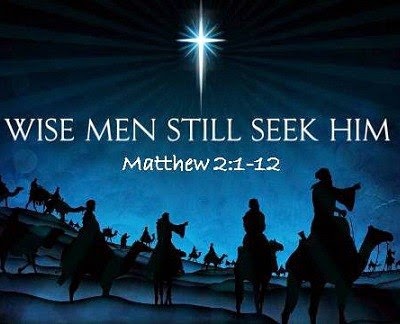 See you tomorrow when we continue in Romans 9.
Posted by Pastor Dan at 15:04