Grace for our stubborn ways

Ephesians 4:7
But to each one of us grace was given according to the measure of Christ’s gift. 8 Therefore He says:
“When He ascended on high, He led captivity captive, And gave gifts to men.”
9 (Now this, “He ascended”—what does it mean but that He also first descended into the lower parts of the earth? 10 He who descended is also the One who ascended far above all the heavens, that He might fill all things.)
Yesterday we discovered a small but significant word: One.

If we are following our One and only Saviour we will go where He calls us to go and do what He calls us to do. This sounds simple but how we struggle. Our will, our ideas, our ways all fight Him at just about every turn. Take something as simple as baptism. There is one baptism. The Bible only speaks of one. Jesus was baptised this way. It consists of a choice made by an adult and involves full immersion under water. 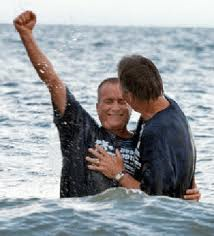 Today we have some churches baptizing babies who have no idea what is happening and we have methods ranging from sprinkling to partial immersion to baptism by rose petals. Why all the varieties in something so simple and straightforward? Because we are not very good at following... If we can't even submit to two basic "rules" for baptism (by full immersion as an adult) it is no wonder why Christianity is so fractured. Like Frank Sinatra sang: "I did it my way."
This brings us to the first verse we read today: "But to each one of us grace has been given according to the measure of Christ's gift."
What covered the Israelites while they wandered and waffled and complained and rebelled in the wilderness? Grace. What covered the disciples while they argued with and second guessed Jesus?

Grace.
Jesus descended to this earth and then took on the role of a lowly servant to make clear the one way. He left no doubt. The path is clear. Then He ascended on high with our forgiveness assured, our sins washed away, and the chains of bondage to sin forever broken. So what's the problem now? Why aren't we following closely and consistently? Why do we still need grace to cover our rebellious wayward wanderings?
Why? Because restoration takes time. Our habits and opinions and our sureness that we are right run deep. We, like the disciples, subject Jesus to our understanding before we ever learn to submit our understanding to His one simple way. The good news is that His love is persistent and His grace is abundant and He is longsuffering. I'm not sure about you but I'm tired of causing Him frustration and suffering because of my stubborn will. Help me Father. Help me follow.
Posted by Pastor Dan at 10:15