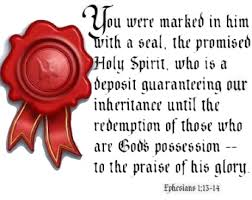 Ephesians 1:11 In Him also we have obtained an inheritance, being predestined according to the purpose of Him who works all things according to the counsel of His will, 12 that we who first trusted in Christ should be to the praise of His glory.
13 In Him you also trusted, after you heard the word of truth, the gospel of your salvation; in whom also, having believed, you were sealed with the Holy Spirit of promise, 14 who is the guarantee of our inheritance until the redemption of the purchased possession, to the praise of His glory."
This chapter is so rich as it pulls back the curtain on the plans and purposes of God. He has a planned destiny for everyone that puts their trust in Jesus. First Jesus redeemed us from the consequences of sin and soon He will redeem us from this earth. In between those two predetermined points in the unfolding purposes of God He has given us His Spirit. Some have been sealed by Him. Others are being sealed by Him now and still others will be sealed by Him in the near future.

To be sealed by the Spirit is to have an unbreakable trust. Abraham demonstrated such trust in Genesis 22. The disciples all demonstrated it in various ways after the cross. The Spirit working and living in us demonstrates to us and through us that God is indeed real and can and still is doing the impossible. While unbelieving men quibble and doubt and try to undermine the faith of others with speculative science and manmade arguments, the Spirit of God continues to change lives around, to heal diseased bodies, and to impart a power in the souls of men that is impossible to argue away.

There is a reason why those who rejected Jesus had to block their ears to the preaching of Stephen. The proof is overwhelming and must be blocked out to not be heard. There are none so blind as those who will not see.

Were it not for the power of God you would not be reading these words because the writer would have been dead years ago. Taste and see that He is good. He has purposed a beautiful destiny for you and longs to seal you with His Spirit. 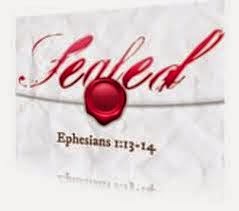