Slaving For An Inheritance?

I want to pause today and go back to something I should have touched on yesterday.

We have obtained an inheritance. There is no missing the verb tense. It is not future or even present tense. We have it.
Now I want to leave Ephesians for a few moments and explore a story that most people familiar with the Bible know well or at least we think we know it. It is the story Jesus told of a man with two sons. The younger son decided he wanted to spread his wings and asked for his inheritance. We call the story "The prodigal son" somehow forgetting the story has two sons. We also tend to end the story before it's over. The younger son returns and the father throws a party and we pull the curtains. Again we ignore the other son.

Truth be told the story is more about the son that never left. He comes home from working in the fields and refuses to join the party. The father leaves the party to talk to him. In the conversation that ensues the older son says two startling things. One is that he has been slaving for the father for years. The second is that he has never received even a goat to have a party with his friends.

Why are they lies? Because way back when the younger son asked for his part of the inheritance it clearly says the father gave each son their portion. You can't be a slave when you are an owner and you can't claim you never received a goat when you were given your entire inheritance.

Could it be that religion is the pursuit of something we already have? Are we slaving to acquire what Jesus has already given freely? Are we so self consumed that the Love of God is ignored in place of our striving? 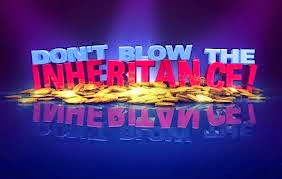 "In Him we have obtained an inheritance..." It can't get much more plain than that... Put your religious resume away. It is an insult to His gift.
Posted by Pastor Dan at 10:36