Warning: Deep truth ahead...
Ephesians 3:8 "To me, who am less than the least of all the saints, this grace was given, that I should preach among the Gentiles the unsearchable riches of Christ, 9 and to make all see what is the fellowship of the mystery, which from the beginning of the ages has been hidden in God who created all things through Jesus Christ; 10 to the intent that now the manifold wisdom of God might be made known by the church to the principalities and powers in the heavenly places, 11 according to the eternal purpose which He accomplished in Christ Jesus our Lord, 12 in whom we have boldness and access with confidence through faith in Him. 13 Therefore I ask that you do not lose heart at my tribulations for you, which is your glory."
Yesterday we looked at this passage and saw why Paul referred to himself as the least of the least. Today we're going to look at what he said.
He introduces himself as one changed by the mystery. He then declares it is his job to reveal the mystery to the Gentile world - a mystery that has been hidden in God since the beginning. Then notice verse 10: The church is to make the mystery known to the principalities and powers in heavenly places. The identity of the mystery is simple. It is the character if God as revealed through Jesus. Once again follow the progression of events:
I was a Christian killer but God revealed Himself to me through Jesus. I am now making Him known to you because He has been hidden from you. You are going to become His church and make Him known to the principalities and powers in heavenly places.
Excuse me Paul? 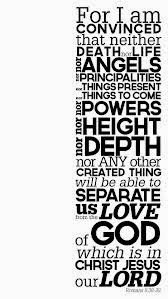 Do you remember in Romans 8:38 where we are told that nothing can separate us from the love of God - not even principalities and powers in the heavenly places? The reality is we operate in a realm where we only think about ourselves. It has become so bad that atheism is growing rapidly. Atheism is the belief that we are all that there is. We have stared in the mirror for so long that we can't see or imagine anything or anyone else.

The Bible tells a very different story. Not only is there a God but there are untold numbers of angels. There are other worlds. There are angels loyal to God and angels against him. We are even told the split is 2:1. We are told the rebel angels have a leader named Lucifer. The loyal angels have a leader named Michael who is Jesus. We are told a war was fought in heaven. The war is over one issue - The character of God. 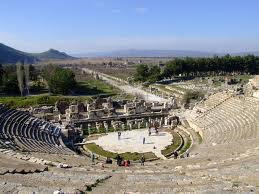 1 Corinthians 4:9 says we have become a spectacle - literally a 'theatron' or theatre to men and to angels.
In Paul's day theatres were open air semi circle theatres with raised seating. The stage was at the bottom and the seats went up from the stage level in a semi circle often carved out of a hillside. They sat thousands and were places of entertainment. Paul says the church, the believers in Jesus here on earth, are a theatre for men and angels and will further reveal God's character to principalities and powers in the heavenly places.
Jesus can take "ISIS" members like Saul and turn them into champions of mercy like Paul. The world is watching. The heavens are watching. Today more than ever the world and the worlds are waiting to see God’s masterpiece - the closing act - the grand finale. They are waiting to see His church rise up and become just like Him. It will literally transform the universe and bring an end to sin and suffering.
Jesus said in the context of love triumphing over hate: "Then this Good News of the kingdom (His character of love and mercy) will be proclaimed in all the world as a witness (through His transformed church) to all nations and then the end will come." Matt. 24:14 The last battle between good and evil is about to be fought and the Mystery is about to be fully revealed. What a day, glorious day, that will be.
Posted by Pastor Dan at 10:14