We Just Think We Know Him 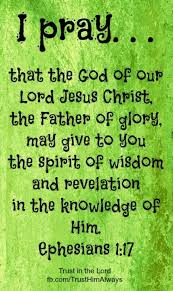 1:15 "Therefore I also, after I heard of your faith in the Lord Jesus and your love for all the saints, 16 do not cease to give thanks for you, making mention of you in my prayers: 17 that the God of our Lord Jesus Christ, the Father of glory, may give to you the spirit of wisdom and revelation in the knowledge of Him, 18 the eyes of your understanding being enlightened; that you may know what is the hope of His calling, what are the riches of the glory of His inheritance in the saints,19 and what is the exceeding greatness of His power toward us who believe, according to the working of His mighty power 20 which He worked in Christ when He raised Him from the dead and seated Him at His right hand in the heavenly places, 21 far above all principality and power and might and dominion, and every name that is named, not only in this age but also in that which is to come.
22 And He put all things under His feet, and gave Him to be head over all things to the church, 23 which is His body, the fullness of Him who fills all in all."
I want you to especially notice verse 17. Paul is praying that those who already have chosen Jesus may receive from God wisdom and revelation in the knowledge of Him. What a strange thing to pray for. They already know Jesus right? Right? I mean these people have likely lost many friends and family members and are in many cases risking their lives to follow this radical ex carpenter from Nazareth. Why would Paul imply they need to know Him? 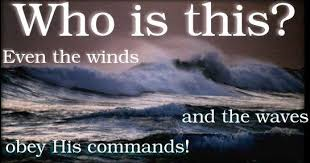 Why indeed... Do you remember the storm on the sea of Galilee? The storm that was so bad that the disciples thought they were going to die. The storm in which Jesus was sleeping. Do you remember what they asked after Jesus stood up and told the weather to settle down?

"Who is this?!"
These men had left good jobs to follow Jesus. They lived with day after day. They knew Him. Why ask such a question? 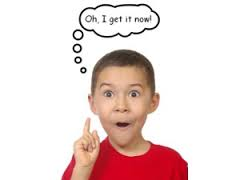 Yesterday we talked a little bit about the father with two sons. Do you know why the younger son who had lost everything and was feeding pigs decided to go home? We are told that while sitting hungry amidst the pigs he had a revelation about his father. He realized the way his father provided for and treated the hired help on his farm was better than any life he had made for himself. He realized his father was a pretty incredible man. It was the character of his father that drew him home... He had spent years being raised by and living with his dad but never realized...
Paul is praying that those who have chosen Jesus would receive a greater revelation of Who He is. Why?
Do you remember the time Jesus was teaching the people and they were all far from any village and time was passing and everyone was hungry? Do you remember how the disciples responded when Jesus asked them to feed them? They looked at their resources (no food and not enough money) and said it couldn't be done.

Did you ever notice that after Jesus used one boys lunch to feed thousands of people the crowd wanted to make Him king? Do you know why? Back then every town of any size was walled. When attacked everyone went inside the walls and closed the gates preventing the invaders from entering. The invading army was prepared for this. They would come with tents and supplies and wait. Eventually the people inside the city would run out of food and surrender.

That day on the hillside when this ex carpenter used a single lunch to feed thousands of people the wheels started turning. They had a revelation! "With Jesus as our king we would never lose another war! We could just lock the gates and he could feed us forever! Our enemies would just give up and go away!"
Now do you see why Paul is praying that the followers of Jesus would receive wisdom and revelation in the knowledge of Him? We just think we know him. My favourite author wrote that He has a thousand ways to do things of which we know nothing. We are weak and worrying because we have lost sight of Him. We live in the pig pen of this world amidst the stench of problems we are helpless to solve consumed with anxiety and fretfulness. Why? Because we need a revelation. In Jesus we have received infinitely more than received forgiveness. Go back and read the verses again. Plaster them on your fridge or better yet memorize them.

Most of all pray. Ask God for what you really need. Eyes to see Him in His fullness. If we could grasp even the "hem of His garment" the people of God would turn this world upside down with a love song writers have only wistfully dreamed about.
See you tomorrow...
Posted by Pastor Dan at 09:39