Are you ready? If you haven't been following the context I can tell you that you are not. (wink) You can catch up at www.lookingtojesus.ca
Colossians 2:16 So let no one judge you in food or in drink, or regarding a festival or a new moon or sabbaths, 17 which are a shadow of things to come, but the substance is of Christ. 18 Let no one cheat you of your reward, taking delight in false humility and worship of angels, intruding into those things which he has not seen, vainly puffed up by his fleshly mind,19 and not holding fast to the Head, from whom all the body, nourished and knit together by joints and ligaments, grows with the increase that is from God.
20 Therefore, if you died with Christ from the basic principles of the world, why, asthough living in the world, do you subject yourselves to regulations— 21 “Do not touch, do not taste, do not handle, ”22 which all concern things which perish with the using—according to the commandments and doctrines of men? 23 These things indeed have an appearance of wisdom in self-imposed religion, false humility, and neglect of the body, but are of no value against the indulgence of the flesh."
There are 5 crucial things to consider when studying a verse or several verses of Scripture: context, context, context, context and... context.
So far we know that the pastor (Epaphras) has written to Paul because his churches in Colossae and neighbouring Laodicea are having problems. They were doing well until persuasive men came and joined them. These men were undermining the idea that Jesus is enough. 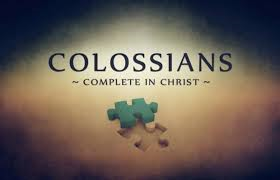 Paul has been repeatedly affirming in his letter back to them that Jesus is enough. He made the plain
statement in our passage a couple of days ago that "you are complete in Him". Yesterday we read that Jesus circumcised them in a way no snipping of the foreskin could and that in dying on Calvary He nailed all of our sins and shortcomings and any accusations the adversary has against us to the cross.
Now to understand the context even more fully you would have to read Romans and the other letters Paul wrote to see that the major controversy (which lead to a council in Jerusalem) was over how Jewish a follower of Jesus had to be. Up until Jesus came heaven was for Jews and heaven was on earth. They expected their Messiah to come and deliver them from their Roman oppressors and make Jerusalem the ruling city of the world. To achieve this God must be happy with them and for God to be happy with them there were endless rites and ceremonies and customs which they must fulfill. Circumcision was a huge one but there were feast days and special Sabbaths and new moon festivals and laws concerning food and drink right down to how they washed their hands. Being a Jew was no simple or casual thing. Then came Jesus. He marched into the temple at the beginning of His public ministry and overturned the tables, scattering the money changers and the priests. He came at the end of his public ministry and did it again. When He died there was an earthquake and various phenomena in the natural world including complete darkness in the middle of the day. When all this took place there was a veil in the temple which divided the holy place from the most holy. It was 75 ft high and 6 inches thick and it tore open from the top to the bottom.
From heaven's perspective Judaism was over. Everything they had been instructed by Moses to do as a people was all pointing to one grand event and it had come. The men were circumcised beginning way back with Abraham to symbolize two things. The Seed who would bless all nations was to come through Abraham's descendants and that He would come through the power of God not the strength of man. It would be all His doing and none of ours. Our flesh would be "cut off" from the process.
Jesus didn't just change the Jewish world on the inside by "turning the tables". He crossed borders and tore down invisible walls. He brought hope and healing far beyond Jewish lands and peoples. He did things that shocked His own disciples. Jesus was indeed the Seed who would bless all the nations.
It is important to point out that things like circumcision were vitally important but only as a means to an end. When you are on vacation and you're following a map or the GPS to get to your destination those tools are vitally important. However once you arrive they are turned off and/or put away. Their purpose has been fulfilled. They are not THE THING, they only point to it. 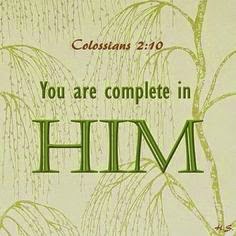 See persuasive men came into the churches in Colossae and Laodicea and said basically that what Jesus did was important but to be truly holy and good required Jesus + Judaism.

We tend to think of falling away from Jesus as doing bad things and "leaving the body". The danger in Colossae was losing sight of Jesus by a false pursuit of increased holiness. In other words the danger was not from outside but from inside and was dressed in "holy clothes".
We take an even closer look tomorrow.
Posted by Pastor Dan at 10:38