Colossians 1:15 "He is the image of the invisible God, the firstborn over all creation. 16 For by Him all things were created that are in heaven and that are on earth, visible and invisible, whether thrones or dominions or principalities or powers. All things were created through Him and for Him. 17 And He is before all things, and in Him all things consist. 18 And He is the head of the body, the church, who is the beginning, the firstborn from the dead, that in all thing...s He may have the preeminence."
This is perhaps the most powerful manifesto in all of Scripture declaring the Divinity of Jesus. Others may disagree. I may even disagree since John 1 is mighty also but it's right up there.
I often repeat my mantra about context and how important it is because, well, it is. Take verse 15 out of context and you could make the case (and many do) that Jesus is a created being, the first created being in the universe. This is not true as evidenced by the rest of the passage. The very next words declare the intent of the term "firstborn over" - For by Him all things were created...
Later in the passage it says He was the firstborn from the dead yet Jesus raised several from the dead before His own death. What does it mean then? 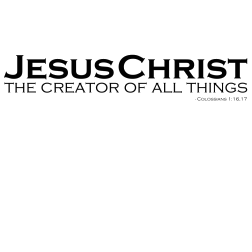 First notice He is the firstborn OVER creation and not the firstborn of creation. Jesus is God as the Bible makes plain in many places. I noted John 1 already. Another very clear one is the instruction from Gabriel to name Jesus 'Emmanuel' which means "God with us".

The idea Paul is conveying is that everything was birthed from Him. He is the First over all. As John 1 says "without Him nothing was made that is made".
As for firstborn from the dead it means the same. Nothing and no one returns to life apart from Him. All original birth is derived from Him and all rebirth comes from Him. We did not create ourselves nor can we recreate ourselves.
His church is the evidence of His regenerating power. The sons of thunder become the chief witnesses of His love and tender mercy. Proud impulsive Peter becomes humble and meek. Broken Mary becomes whole again. The depraved demoniacs are restored to perfect wholeness.
He created us in His image and despite the ravages of sin we can through Him rise up and be recreated by the same Jesus who made us in the first place. If you want to see God look at Jesus. If you want to experience God follow Jesus. If you want to be recreated in the image of God surrender fully to Jesus.
Posted by Pastor Dan at 11:08