Nailed to the Cross 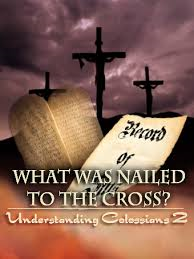 Colossians 2:11 "In Him you were also circumcised with the circumcision made without hands, by putting off the body of the sins of the flesh, by the circumcision of Christ, 12 buried with Him in baptism, in which you also were raised with Him through faith in the working of God, who raised Him from the dead. 13 And you, being dead in your trespasses and the uncircumcision of your flesh, He has made alive together with Him, having forgiven you all trespasses, 14 having wiped out the handwriting of requirements that was against us, which was contrary to us. And He has taken it out of the way, having nailed it to the cross. 15 Having disarmed principalities and powers, He made a public spectacle of them, triumphing over them in it."
If ever there was a chapter in the Bible ripped from it's context and misapplied by countless theologians and preachers and everyone else it is Colossians 2. Thankfully there is Colossians chapters 1 and 3 and the rest of the Bible to balance it all out and frame it in time and space.
Remember from yesterday that persuasive men have come in among the believers in Colossae and Laodicea with philosophies designed to convince them that Jesus was not enough. Paul affirms that they are complete in Jesus and in today's passage he explains why. He says Jesus circumcised you in a way no human circumcision ever could. How? By removing all sinful flesh.
Buckle your seat belt: 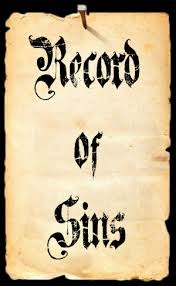 In Psalms 130 the Bible says God does NOT keep a record of our sins. 1 Corinthians 13 says the same. Jesus needs no record because His plan was to do something so powerful that they would all be obliterated anyway. In metaphorical imagery Jesus cut off our sinful flesh (circumcision without hands) and took it on Himself. Then He died because the wages of sin is death. The He arose to demonstrate his power and victory over sin and death. Our sins caused Him to lay down His life but His sinless existence here as one of us empowered Him to take up His life again.

By faith we went through all that with Him. By faith our sins are gone. Our sinful flesh is cut off and destroyed in Him. By faith we rise with Him free and victorious and new. It's called Good News (gospel) for a reason. It is so good only faith can grasp it. In Colossae and Laodicea they had the truth of our completeness in Jesus but persuasive men have come in among them to convince them that there is more. Jesus + more = true salvation they are saying.
So what was this handwriting of requirements that was against us that was nailed to the cross? Some say it is the ten commandments but properly understood they are ten promises and you don't kill promises. Some say it is all the other laws Moses wrote down. However all those laws were in detail and/or in principle for our good so why nail them to the cross?
Think about it. The law is not and never was the problem. Our failure to live in accordance with them is what has caused and continues to cause us pain. Every failure on our part has been faithfully recorded but not by God or Jesus. There is an accuser of the brethren who accuses us before God day and night. He holds up before God a list of our failures in an attempt to prove we are not worthy of anything but death. Jesus took that and nailed it to the cross. In one act he fulfilled the requirements of a sinless life to satisfy the law and paid our death penalty thus silencing the arguments of the accuser. 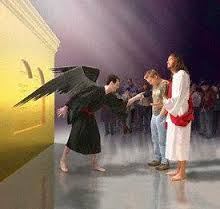 Tomorrow we will get a clearer picture of what the persuasive arguments were in Colossae and Laodicea.
Posted by Pastor Dan at 12:22