Philippians 2:5 "Let this mind be in you which was also in Christ Jesus, 6 who, being in the form of God, did not consider it robbery to be equal with God, 7 but made Himself of no reputation, taking the form of a bondservant, and coming in the likeness of men. 8 And being found in appearance as a man, He humbled Himself and became obedient to the point of death, even the death of the cross. 9 Therefore God also has highly exalted Him and given Him the name which is above every name, 10 that at the name of Jesus every knee should bow, of those in heaven, and of those on earth, and of those under the earth, 11 and that every tongue should confess that Jesus Christ is Lord, to the glory of God the Father."
The truth is that seeking the top leads to the bottom. 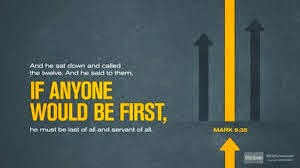 What we struggle to realize is that the universe is at war but it's not a war of bombs and guns, it's a war of ideas. In our times we hear lots about the war on terror and the crises in the middle east. Despite all the peace talks and wars fought and money spent the unrest is increasing. It seems no matter what the west does the intensity just keeps rising. The biggest reason for this is that the west fails to grasp that they are not warring against a country or a group of people. They are fighting ideas, ideas they don't understand and ideas that spread by fighting against them. Islam has a view of the west based on their religious world view. We in the west have a worldview that doesn't understand Islam. They think we should think like them and we think they should think like us.

Warring against an idea is a lot more complex than warring against a country or a group of whatever description. Ideas are invisible. Ideas are impossible to kill unless you kill every person that has the ideas or unless you present something so compelling that their ideas change.
Now imagine a universe created by a God. Imagine that within that vast universe among His created beings the idea rises up that this God is evil despite His brilliant appearance and seemingly good character. How do you counter such ideas? Killing those who think He is evil would only serve to convince others that He is and the idea would spread and solidify. Somehow this God would have to demonstrate over time and through various circumstances that He is anything but evil.
When Jesus came to this earth as one of us and then allowed Himself to be killed the watching universe was shocked and fully and finally convinced. By choosing to become nothing He became something war would never achieve. He became understood. He became the embodiment of the love they doubted was truly in Him. Evil doesn't die for others. Evil seeks itself. While Jesus was being killed His Father, whose character had been on trial for millenia did nothing. He, for the sake of restoring peace to the universe and putting to death once and for all the idea that He was only self seeking and evil was forward put to rest in the realm of the angels.

As history continues to unfold here on planet earth where we are far less aware of the war in the universe over what God is really like the picture for us will become clearer.
Paul says very clearly that Jesus is fighting the war through self sacrifice and calls those who follow Him to do the same. This is why Paul is ok with being in prison. His life here on this earth is of no consequence to him. Why should it be? He understood that all that matters is for people to learn the truth. Truth as Jesus said is the path to freedom.
When the truth finally and fully comes out and God is seen for the all loving God that He is and Satan and his followers are exposed for the liars they are the war will be over. So complete and compelling will be the evidence that every knee will bow and every mouth will confess that Jesus is Lord. Some will confess it with joy because they always believed He was love. Others will confess it because the overwhelming evidence will force the confession from them and they will admit defeat.
Peace is coming to the universe and this earth. It will be achieved in the only way that works. Evil will exposed for what it is. Love will be exposed for what it is. Today we live in the midst of the war. We are being called to choose.
Let me make it simple. Love is self sacrificing. Evil is self seeking. I choose love. I choose Jesus. I choose God. I can't wait for Him to be fully and completely revealed for all that He is!
Posted by Pastor Dan at 07:47