Seeing Beyond the Surface

Philippians 1:9 "And this I pray, that your love may abound still more and more in knowledge and all discernment, 10 that you may approve the things that are excellent, that you may be sincere and without offense till the day of Christ, 11 being filled with the fruits of righteousness which are by Jesus Christ, to the glory and praise of God."
I had planned to continue into verses 12 and onwards today but as is often the case the Lord had other plans. Yesterday we looked at the fact that love is a game changer. It is the only thing in the universe that has the power to reshape our very nature into a better one. This much is obvious. What is less obvious is what love is and how infinite it is. 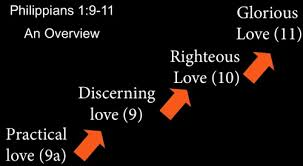 Let's face it. Love is an word that is over used, misused, and often portrayed as something other than what love actually is. Notice that Paul was praying for their "love to abound more and more in knowledge and all discernment". Before we go any further let's think about the implications of that statement. First he is implying quite openly that they have a limited knowledge of what love actually is. Then he adds to the dimensions of love the quality of discernment. 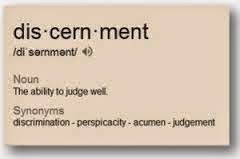 There are lots of varying nuances to define what discernment is. Some would say it is the ability to see things as they actually are. Some would say it is the ability to know what is needed or what to do in a given situation. All of this is true. Eyes might see an angry person while discernment sees a scared person lashing out in anger as a response to their fear. As a husband, parent and pastor I crave discernment, I need discernment. In relating to other people we all need the ability to see beyond what is to the truth of the situation. Often strong emotions are only defense mechanisms or smoke screens to hide what is really going on the heart of a person. Silence can also be hiding something.
All my life my dad has been prone to what I considered irrational outbursts of anger. It took me over 3 decades to discern that anger is my dad's response to fear and helplessness. For example when we got sick he would get upset as if we had done something wrong. On the surface it seemed irrational but now that I understand anger is his reaction to feelings of fear and helplessness it changes everything. His anger was rooted in love because if he didn't love us he wouldn't have been affected by our sickness. However anger is not pleasant and without discernment our reactions to his anger were at best inappropriate to put it politely. 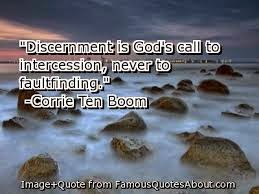 God is the source of love because He is Love. God is the one who can open our eyes to see things as they truly are.
Now look at why Paul is praying for them to have a deeper knowledge of love and greater discernment: "that you may approve the things that are excellent, that you may be sincere and without offense till the day of Christ, 11 being filled with the fruits of righteousness which are by Jesus Christ, to the glory and praise of God."
Discernment teaches us what is excellent. Discernment can see past irrational anger and see fear that is a response to love and concern. Then instead of responding in anger which is the natural human response, we can respond with encouragement and assurance. "Dad I'm going to be ok, everything is going to be ok". 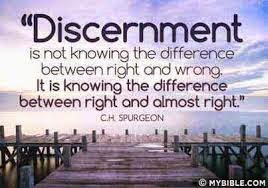 Discernment can see what the results of choices will be and cut off a bad choice before ever heading
down that path.

Discernment can see what a person you love needs before they have even found the words or recognized the need to ask. "Before you call I will answer" - God.
If we could discern how powerful discernment is we would be praying for it for ourselves and our loved ones. Look at the fruit it produces: seeing what is excellent, sincerity because we see past the surface to the heart, and removes offenses. Think about it. We offend each other because we can't see their heart. Sometimes people are offended by things we didn't even know about. A friend sees us and they are really down and they were hoping for an ear to listen and perhaps a hug. We saw them, they appeared fine, and we said hello and moved on. Discernment would have prevented that.
The example might seem insignificant but the implications are deep. Life is relationships and without discernment fueled by love we're bumping around in the dark.
Paul knew what they needed in Philippi and I think I might be a Philippian too. How about you?
Posted by Pastor Dan at 09:24