Jude
16 "These are grumblers, complainers, walking according to their own lusts; and they mouth great swelling words, flattering people to gain advantage. 17 But you, beloved, remember the words which were spoken before by the apostles of our Lord Jesus Christ: 18 how they told you that there would be mockers in the last time who would walk according to their own ungodly lusts. 19 These are sensual persons, who cause divisions, not having the Spirit."

There are two kinds of people you should watch out for and if one of them lives in your mirror you should really pay attention. One is people who grumble and complain. The other is those who like to flatter you.

Remember the context. Jude is addressing the very real problem of people who claim to be followers of Jesus and belong to the church yet really want to do their own thing, follow their own selfish desires and have the church be ok with it. 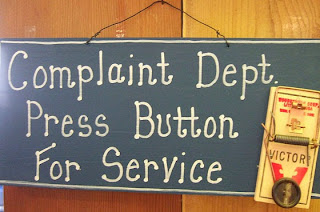 Some accomplish this goal of changing the path Jesus has for His people by complaining. Complaining is one of the most energy sucking things a person can do. All it takes is one whiner in any group to totally ruin the dynamic. It also creates a situation where everyone wants the same thing. They want to get back to the place where everyone is happy and the complaining stops. The problems and divisions come at this point because there will be multiple views on how to get there.

When the Israelites were travelling from Egypt to the Promised Land there were many complainers. The most consistent complaint or twisted desire was to go back to Egypt. However it's hard to legitimize this complaint when a cloud by day and pillar of fire at night are obviously leading the way. Then when they were camped in one spot for a while both the cloud and Moses went up the mountain leaving the complainers and a temporary leader in the valley. The first thing a complainer needs to add credibility to his or her complaint are sympathizers. The second thing they need are legitimate or at least legitimate sounding reasons to back their complaint. The final thing they need is an alternate solution. Come to a leader with a problem, demonstrate that many agree it is a problem, give evidence to prove it is a problem and then hand them a gift wrapped solution: this is the path to "success" almost every time.
Aaron was the leader left in charge while Moses was gone. The complainers followed the three steps. Aaron knew it was trouble but instead of firmly denying them he left the door open. He put the ball in their court thinking they wouldn't agree. Their solution was that they needed a new God and a new leader since Moses was clearly gone too long and was not coming back.
Aaron agreed to make them a god if they brought him all their gold jewelry to use to make it. He figured that would stop them. He assumed their greed was greater than their desire for a new "leader". He was mistaken and once he opened the door there was no going back...
Complaining mixed with flattery - a powerful concoction. They didn't revolt against Aaron. They came to him and flattered him with the notion that it was within his ability to solve this great and urgent dilemma. Very shortly after this "dilemma" was solved Moses returned... oops.
The truth is they weren't upset he had been gone. They were happy because even though they belonged to the group that was headed for the promised land they really wanted to return to Egypt. Moses absence and the absence of the cloud created the opening they needed to legitimize their own desires.
The truth is our own warped desires are the greatest threat to our own advancement. Warped desires in the body of Christ are the greatest threat to the unity and success of the church as it seeks to truly follow Jesus.
Jude sees the threat to the church and he identifies it with bold pinpoint accuracy. 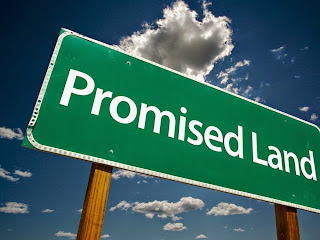 We live in a culture where the laws of society and of the churches are being rewritten to suit our warped desires. We live in the age of the Golden Calf. Right is being replaced by my human right to do as I please. Every day going forward will be messier and more complex than today is. We need more than ever to fix our eyes on Jesus especially when it seems He is far away and perhaps never returning.
There is a saying that when the cat is away the mice will play. Don't play with them. It will only lead to hurt.
"Keep my laws that it may go well with you." - God
Posted by Pastor Dan at 09:56