The Gospel of John Begins!

Each of the 4 Gospel writers has a unique style and a particular thrust to their story. Each is not just telling what happened. They are telling it in such a way as to make a specific point about Jesus and His life and mission.
Of the 4, John is by far the most unique. He concerns himself little with the chronology of Jesus' life and the events that happened. Instead it's more of a behind the scenes look designed not to give us information but to reveal the identity and character of Jesus the Messiah and what His true identity means for us.
Let me tell you a story about myself to illustrate what is often wrong with religion and then contrast it with how religion should be as demonstrated by Jesus through the Gospel of John.
Several years ago a Muslim man began attending my church on a semi regular basis. Whenever he was there he would engage me in conversation after the service was over. He would ask me questions clearly designed to influence me toward Islam. I would ask him questions to challenge his thought process. He frankly admitted one day that in Islam you are judged by how many good things you do against how many bad things you have done. Whichever is greater determines your destiny. I asked him how there could ever be peace and assurance in such a system? He left in deep thought. He returned a few weeks later and I preached the gospel. He had tears in his eyes. Clearly the message of His Good News was having an effect on him. That day he slipped out quietly with no talk of Islam or my question. He did not return for many weeks. Then one day he came again. This time after the service he was quite animated and wanted to know if we could talk privately. We went to a room in the basement where we wouldn't be disturbed. He pulled out a Bible and told me he too believes the Bible. I was excited. He showed me many places where he had underlined sections. He then told me he too believed in Jesus, that He was a great prophet like Mohammed. 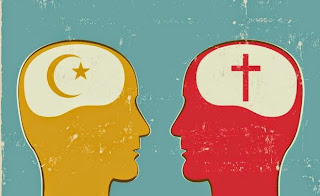 It was at this point that the wheels fell of. I went from a humble sharer of truth to a man seeking to prove I was right. His claim that Jesus was just a prophet like Mohammed offended me. I asked him if he believed all of the Bible he held in his hand. He said he did. I asked him for it and he passed it to me. I opened it to the Gospel of John, the first chapter. I gave it back to him and asked him to read it.

"In the beginning was the Word, and the Word was with God, and the Word was God. 2 He was in the beginning with God. 3 All things were made through Him, and without Him nothing was made that was made. 4 In Him was life, and the life was the light of men. 5 And the light shines in the darkness, and the darkness did not comprehend it."
I then asked him to skip to verse 14:
14 "And the Word became flesh and dwelt among us, and we beheld His glory, the glory as of the only begotten of the Father, full of grace and truth." 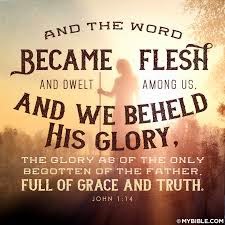 He looked up from the page with a look of bewilderment on his face. Clearly he had never read this before. He said "Are you saying Jesus is God?"
I smiled smugly. No longer a humble sharer I was now a predator with his prey helplessly caught. I was right and I had proved it.
The poor man leapt from his chair, prayed a frantic prayer in his own language, then looked at me with literally terror in his eyes and said "May Allah forgive us" and he fled the church. I never saw him again.
John just introduces Jesus as the Light of the world, present since the beginning, the Creator of all, and that the Light shines in the darkness for all to see. 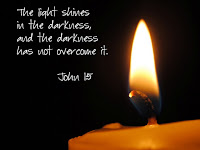 Had I been less eager to be right and prove it, and more willing to just let the Light continue to shine what a different ending the story may have had. Obviously God's Light still shines on that Muslim man's path but I was no help to him that day. He had a picture of who Jesus was painted by his religion and the Jews of John's day had a picture of the Messiah painted by their religion. John has a message for us all that Jesus is greater in position and in character than any of our pictures see Him.
See you tomorrow...
Posted by Pastor Dan at 09:14