16:12 “I still have many things to say to you, but you cannot bear them now. 13 However, when He, the Spirit of truth, has come, He will guide you into all truth; for He will not speak on His own authority, but whatever He hears He will speak; and He will tell you things to come.14 He will glorify Me, for He will take of what is Mine and declare it to you. 15 All things that the Father has are Mine. Therefore I said that He will take of Mine and declare it to you."
I am not a patient person by nature. Not at all. I haven't encountered many people who are. I find that we are especially impatient when it comes to character/behaviour issues. We expect much from others and tolerate very little in the way of mistakes. Just look at how we treat other drivers on the road or the way we demand of children to do the right thing every time all the time. We write politicians off as soon as they make a statement or decision we disagree with. We call an athlete a bum if he or she has one off game or makes an obvious mistake or goes a few games without scoring. In all of this we forget two major facts. One is that we're all flawed humans and the second is that even if we are working to improve, growth and change is a process not an event. Let's repeat that again: growth and change is a process not an event. 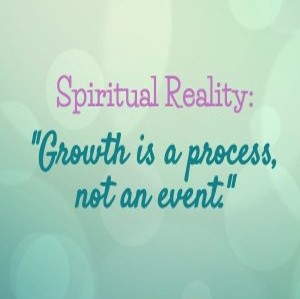 As Jesus is teaching His eleven about life after his departure He pauses for a moment and says something incredibly revealing: "I have many things to tell you but you are not able to bear them now."
The idea of the word bear is to carry away or carry with you. In other words Jesus had so much more to teach them but even if He had spoken the words it wouldn't have done any good. Their buckets of comprehension were full and they would have been unable to carry the concepts with them. Einstein was a brilliant man but I'm pretty sure that at 5 years old his teacher would have had to look into those bright inquisitive eyes and say "You have much to learn, there are so many things to tell you but you are not able to comprehend them yet. Some day you will..."
These eleven men have been with Jesus for over 3 years. They have seen Him do amazing miracles. They have heard Him explain the Scriptures in ways they had never heard. They even were granted the power to do miracles themselves. There were no other people on earth (except perhaps Mary) who knew Jesus better. Yet even to these select men Jesus basically said "There is still a ton of stuff you don't know and are not even ready to know. Because of this, one of the jobs of the Helper is to continually lead you into more and more light."
It is a process, not an event. Going to church, being around people who say they believe is still being among people who are very much works in progress.
Being impatient with believers who don't fully reflect Jesus as you think they should or being demanding and critical of yourself because you just aren't measuring up is unfair. It is also out of sync with Jesus' teachings. Growth and positive change is a process, not an event. Giving up because of imperfections in you or in other professed followers is like giving up on exercise because your body isn't perfect or the guy jogging beside you is fat.


Jesus will not give up on you until He can say "Well done good and faithful servant." So be patient. Masterpieces take time...
Posted by Pastor Dan at 09:18