18:1 When Jesus had spoken these words, He went out with His disciples over the Brook Kidron, where there was a garden, which He and His disciples entered. 2 And Judas, who betrayed Him, also knew the place; for Jesus often met there with His disciples. 3 Then Judas, having received a detachment of troops, and officers from the chief priests and Pharisees, came there with lanterns, torches, and weapons. 4 Jesus therefore, knowing all things that would come upon Him, went forward and said to them, “Whom are you seeking?”

Some would say this is just stupid. People don't and shouldn't willingly walk into a trap but Jesus did. So did Daniel. Then the obvious question is why? Why would an otherwise intelligent person say "If you want to kill Me here I am?"
Why indeed?

There are two basic reasons for living. One is to survive and do our best here and now. The other is to live with purpose for reasons that stretch beyond the here and now. One is instinctual, the other is done with meaning and intention. The will of animals and humans to survive is incredible. To live no matter what is built into us. It takes a lot to destroy that drive to survive. We applaud as heros those find ways to defy the odds and escape imminent death. There is nothing wrong with wanting to live but there is a more powerful way to exist in this world.

Purpose. More powerful than the instinct to survive is a life lived not to survive but to accomplish a set task. Living is great but living with purpose and meaning is far greater. Driven people who live not just to breath but to create and accomplish the seemingly impossible inspire and amaze us. Living with a purpose that transcends our own life is the greatest of all. 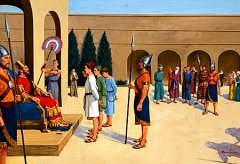 Daniel was born like every baby. He was taught about God like billions are. He faced adversity like billions do. Life was not kind to him. His parents were murdered by a zealous regime set on conquering the world. He and many others were captured and taken to the capital city of Babylon at a young age. The intent was to train them to some day return to their homeland as leaders loyal to Babylon. The language was different. The religions were pagan and strange. The customs and food were all unfamiliar. The Bible tells us that from day one in that strange place Daniel purposed in His heart to serve the God of heaven. At that young age in those surreal circumstances he chose his life purpose. 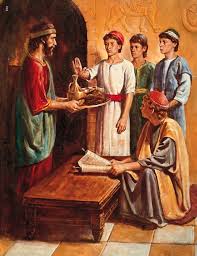 Fast forward nearly 70 years. Daniel has worked under 4 kings and 2 empires. God has worked amazing miracles for him personally and for his friends. He has seen a tyrant king become a follower of his God. He has seen an empire crumble before his eyes just as a prophet of God said it would. He has been given visions of the future. He has talked with angels. He has lived a life of purpose under God that was both full of trouble and of triumph. Now in his later years but still full of life and energy Daniel is once again being challenged. Jealous colleagues have found a way to kill him by using his loyalty to God against him. All Daniel has to do to escape their plot is either not pray to God or do it in secret for 30 days.

So easy. I mean what is simpler than praying in secret? No one needs to know. However Daniel had a custom that was part of his life of purpose. Surrounded by people who did not know his God, Daniel determined to make Him known by the life he lived. Every morning and every evening at the times appointed by God Daniel would open his window that pointed toward Jerusalem and pray. Some might misunderstand this as showing off. Jesus actually told the religious people of His day to stop praying in the streets and go pray privately in their closets. However Daniel wasn't doing it to show off. He was sharing his faith with people who did not know his God. He wanted them to know the true Source of his kindness, faithfulness, and success. He wanted even his enemies to know that his stellar service record and flawless life were not an accident. 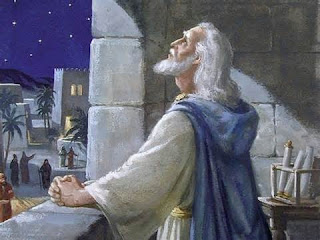 Daniel's life purpose made praying publicly under the threat of death of greater importance than ever. What message would it send if suddenly he withdrew to save his own skin? Daniel's worldview was simple. God had brought him to this moment against incredible odds and it was up to God what should happen next. There would be no hiding for the sake of survival. There would just be living as usual - with purpose.

See you tomorrow when Jesus steps with purpose into the trap Judas has set.
Posted by Pastor Dan at 09:13