18:1 When Jesus had spoken these words, He went out with His disciples over the Brook Kidron, where there was a garden, which He and His disciples entered. 2 And Judas, who betrayed Him, also knew the place; for Jesus often met there with His disciples. 3 Then Judas, having received a detachment of troops, and officers from the chief priests and Pharisees, came there with lanterns, torches, and weapons. 4 Jesus therefore, knowing all things that would come upon Him, went forward and said to them, “Whom are you seeking?”
5 They answered Him, “Jesus of Nazareth.”
Jesus said to them, “I am He.”

I have seen a lot more movies in my lifetime than I probably should have. Many of them end with that feeling of "there is 2 hours I'll never be able to get back." They all sound so good by the description on the back and once in a while they truly are a worthwhile story but too often they disappoint. I grew up a huge fan of the Hardy Boys mystery series. Classic good guys foiling the bad guys. Whether it is a book about the good guys versus the bad guys or a movie, rarely do you see the good guys walk up to the bad guys and say "here I am". 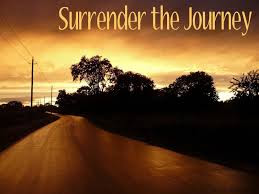 Notice I said rarely
.
There are times that it happens. Times when the good guys know that based on the circumstances of the conflict surrender is the best option.

Jesus was not caught by the bad guys. He was not trapped. He was not the victim of some masterful plan from which He could not escape. Multiple times prior to this night He had walked away from their attempts to kill Him without any trouble. We're not talking about defenseless pacifist Rabbi who can't run or fight. We're talking about a Man who walks on water, raises the dead, and tells the weather what to do.

But on this night He just walks up to the soldiers with their weapons and torches and says "I'm your guy."

The obvious questions are why and why now and why not before?

Do you remember what Jesus said back in chapter 12 when this evening began? 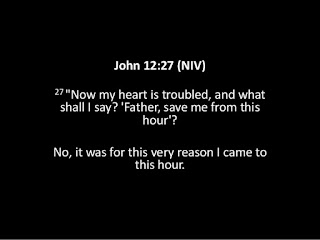 “Now My soul is troubled, and what shall I say? ‘Father, save Me from this hour’? But for this purpose I came to this hour."

There it is again: purpose. Jesus did not come into this world as one of us to be a mighty conqueror in the Hollywood sense and ride off into the sunset with His fair maiden. He was announced by the prophet John the Baptist as the Lamb of God that takes away the sin of the world. Now Isaiah 53 is about to be played out. The Lamb is silently and submissively going to the slaughter not as a victim of evil genius but as Man on a mission.

There is something deeply powerful about knowing, understanding, and living your purpose.

Check out what Revelation says about those who follow Jesus:
"And they overcame him (satan) by the blood of the Lamb (Jesus) and by the word of their testimony (the lives they lived), and they did not love their lives to the death."
In simpler terms they loved God's purpose for their lives more than they loved their own survival.

Look how Hebrews 11 describes the lives of those who lived with the sole purpose of serving God in a world hostile to Him: 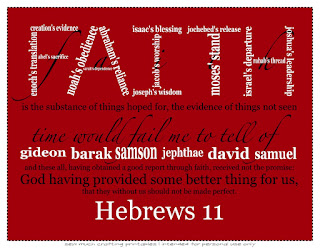 11:33 "...who through faith subdued kingdoms, worked righteousness, obtained promises, stopped the mouths of lions, 34 quenched the violence of fire, escaped the edge of the sword, out of weakness were made strong, became valiant in battle, turned to flight the armies of the aliens. 35 Women received their dead raised to life again.
Others were tortured, not accepting deliverance, that they might obtain a better resurrection. 36 Still others had trial of mockings and scourgings, yes, and of chains and imprisonment. 37 They were stoned, they were sawn in two, were tested, were slain with the sword. They wandered about in sheepskins and goatskins, being destitute, afflicted, tormented—38 of whom the world was not worthy. They wandered in deserts and mountains, in dens and caves of the earth.
39 And all these, having obtained a good testimony through faith, did not receive the promise, 40 God having provided something better for us, that they should not be made perfect apart from us."

Survival is rooted in the belief that this life is all there is. Sacrifice is rooted in the belief that there is far more. Jesus knew that the "far more" all depended on His mission. The bridge from death to life was across His own back. He walked into that garden knowing far more about what was to come than even His enemies did. To turn from this was to turn from the very reason He was here.

Tomorrow we'll explore the why and the timing more. For now I'll leave you with this thought:
It is better to die with purpose than to live without any...
Posted by Pastor Dan at 10:35