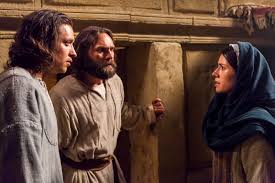 Peter, Peter, Peter. It has been a turbulent few hours. It's easy to sit in our comfort from our clinical distance and judge him. Too easy. Jesus said "With the measure we judge others we will be judged ourselves." Consider all these factors:

1, Jesus is on a mission Peter was raised to reject. The Messiah Peter was trained to expect was diametrically opposed to the One he got. Say what you want but if 16 years of pastoral ministry has taught me anything, it is that people do not easily part with long held beliefs no matter how wrong those beliefs may be. If they do part with them there is a definite period of disillusionment/confusion between what they used to believe and what they come to believe. The human mind struggles with the very real cognitive dissonance. How could it be that they and/or so many others had it so wrong for so long?

2, In a period of less than twelve hours Peter has been faced with:
A. The betrayal of Judas, a man they have worked with, travelled with, slept beside, ate with, and trusted for over 3 years.
B. The announcement by Jesus that Peter would abandon and deny Him.
C. The news that Jesus is leaving.
D. Jesus teaching them some pretty heavy stuff
E. Jesus just handing Himself over and then refusing Peter's attempts to defend/help Him
F. Seeing firsthand that the church that raised him and gave him the hope of a coming Messiah is the same church that is now going to kill Him.

3. Peter despite all this is still as physically close to Jesus as he can be.

So are you appreciating more how much his mind must be spinning? Are you seeing that no man is prepared to handle that much mental/emotional overload in such a short time?

Way back when King David was just a shepherd boy Samuel the prophet came to his house to anoint one of the sons of Jesse as the next king of Israel. Jesse had many sons. One by one they were brought before Samuel and one by one Samuel was ready to anoint each one but God kept telling him no. Finally there were no sons left. Samuel was confused for two reasons. First he was certain he was to anoint a son of Jesse now that seemed impossible and secondly he couldn't figure out why God had rejected so many seemingly perfect candidates. Bewildered he asked "Isn't there anyone else?" There was one more son - David. He was not even considered a potential king by his own father. He was left out of the selection process. They had to send someone out to the field to get him. When Samuel saw him he doubted too but God told Samuel "Man judges the outward appearance. God judges the heart".

Peter appeared to deny Jesus. His words said it. It seems an open and shut case. However we should be much slower to judge than we are.

Peter was disillusioned, confused, exhausted and spent. His attempts to help had been refused, his ideas of how things were supposed to go were trashed, and now the words falling from his lips were exactly the words he promised he would never say.

Think about this though. Where is he?

It's easy to judge him but the question I'm now asking myself is "all factors considered would I have been so loyal?"

The best news is yet to come. The story is far from over
smile emoticon
Posted by Pastor Dan at 10:13