18:28 Then they led Jesus from Caiaphas into the Praetorium, and it was early; and they themselves did not enter into the Praetorium so that they would not be defiled, but might eat the Passover. 29 Therefore Pilate went out to them...

I'm not sure this needs words but just in case I'll do my best to express the depths of blindness conveyed here.

When I was a child, probably 10ish years old we were on our way to church. I can still see where we stopped because a stranger was on the side of the road with a flat tire. My dad stopped to help and in about 15 minutes we were back on the road. When we arrived at church we were confronted with a scolding for being late as we were part of the program to start the service. An explanation for why we were late made no difference. As a young person that really bothered me. Did she prefer we not help the person in need just so we would arrive on time? It seemed wrong to me then and still seems wrong to me now. When religious duty and practices become more important than people we have lost sight of God without a doubt.

In the passage above we have a group of religious men who are set on killing Jesus. The worst part is not that they are religious. The worst part is that Jesus is the Messiah they have been waiting for. He is not the leader of some opposing religious movement. He is their Messiah. This would be like the Catholics killing their own pope only worse - much worse.

Now a little history is necessary to fully grasp the scene. The Jews are under Roman rule. They of course hated this and considered the Romans to be unclean pagan gentiles. However the Romans had the political and military power and one of the rules was that only Rome had the right to exercise the death penalty no matter who the criminal was or what they had done.

Pilate was the Roman governor in charge of Jerusalem. They had no choice but to bring Jesus to him if they wanted to execute Him 'lawfully'.

Remember it is Passover time. Passover is one of the greatest Jewish feasts of the year celebrating their rescue from slavery in Egypt when death 'passed over' every home marked by the blood of a lamb. Now the Lamb of God is about to die at just the right time so that death can pass over all people. 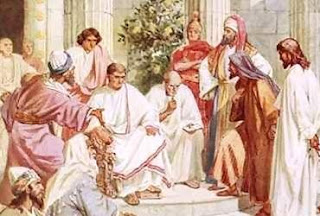 Now hit the pause button. There is a problem. These religious leaders plan to have Jesus killed and then go home and continue celebrating Passover as if nothing happened. The problem is that Pilate's Praetorium is considered pagan Roman territory. To go in would make them unclean and then they would have to go through a ritual cleansing that would take days and they would miss the rest of the feast.

So religious they couldn't enter the Praetorium. So evil they are about to kill their own Messiah.

We are witnesses - every single one of us. The only question is what kind? Are we religious in deeds and practices that we think will benefit our own soul while trampling on everyone else?

My wife's grandmother had a saying for this: "So heavenly minded they are of no earthly good." I don't like the saying because it misrepresents the Mind of heaven. I have a shorter saying: "sick".
Posted by Pastor Dan at 10:30