18:28 Then they led Jesus from Caiaphas into the Praetorium, and it was early; and they themselves did not enter into the Praetorium so that they would not be defiled, but might eat the Passover. 29 Therefore Pilate went out to them and said, “What accusation do you bring against this Man?” 30 They answered and said to him, “If this Man were not an evildoer, we would not have delivered Him to you.” 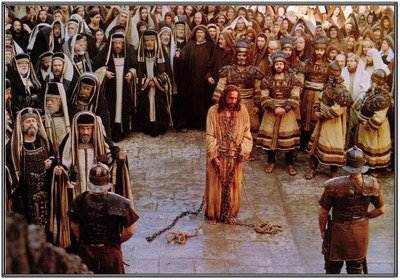 I often wonder what kind of witness I am. By witness I mean when people observe me and the life I choose to live what impression of God does it create for them? Where I live there are many Mennonites. I do not profess to be any kind of expert on Mennonites but I do know there are a broad range of lifestyles within their faith community. Some live in what we would consider a very old fashioned way. Others are what we might call modern and unless they told you they were Mennonite you would never know.

The "old fashioned" ones dress very plain/modest and the women wear caps on their head. There are two different groups because some wear a white cap and others a black cap. They have their own churches and schools and don't mingle. Immediately when I learned all of this I was curious what the difference was. I wanted to know why they were choosing to be separate when they shared the same history and were so obviously similar. I asked my neighbours who were not Mennonite but they didn't know either. Finally one day I was having lunch at a local Mercantile and the waitress was wearing the signature black cap. As politely as I could I asked if she could tell me what the differences were between the white capped and black capped Mennonites. Her answer was not what I was expecting. She paused, thinking, and then shyly almost sheepishly said "I don't know."

They all live close together, pass each other in the store, the bank, at the gas station etc... yet worship in separate churches and send their children to separate schools and at least some of them don't even know why. I must admit her reason or lack thereof did not make her a great witness. On the other hand they are super nice people and in pretty much every other way they are impeccable witnesses. Probably what impresses me the most is how hard working, kind, and polite their children seem to be.

Religion is a strange thing. As I ponder this encounter between Pilate and the religious leaders who have brought Jesus to him I can't help but think about the impression they are making on him. What do their behaviours convey about their God? First God has favourites. Second God is a snob. I mean how self important do you have to be to refuse to enter someone else's property in order to maintain your own purity? It was actually God's intention to have the Jews attract the world to Him but their increasingly divisive religious ideas have done the exact opposite. Their elitism and strange practices only served to make them a hated spectacle.

What a contrast Jesus was. He had people from every walk of life and even from other countries and religions seeking Him out. Not once did He ever make a person feel dirty or less or an outsider.
Now Jesus is brought like a common criminal. Pilate shows a humble spirit by coming outside in the early morning hours to meet Jesus' accusers. His question is simple. "What has He done wrong that you have brought Him here?"

I don't know if Pilate was expecting a certain response but I'm fairly confident he wasn't expecting the answer he got. "If He wasn't an evildoer we wouldn't have brought Him."

Seriously? They had over 3 years to prepare for this moment to lynch Jesus. They have had countless backroom meetings about it. They have already been to Annas and Caiaphas and that's the best they could come up with? What a witness. It's no shock that most religions have a hard time attracting new people...

Now it is true that God says His true followers are to be a peculiar people and a holy nation. However He did not say weird, judgmental, snobbish or rude.

If we want to be peculiar and holy as Jesus was let's try something truly crazy. Let's love people, all people. Let’s treat them with dignity and respect and help them in whatever way we can.

"They will know you are My disciples if you love each other in the same way I have loved you." - Jesus
"We are Christ's representatives upon earth. How do we fulfill our mission? Christ's representatives will be in daily communion with Him. Their words will be select, their speech seasoned with grace, their hearts filled with love, their efforts sincere, earnest, persevering, to save souls for whom Christ died."

Now that would be peculiar!
Posted by Pastor Dan at 09:16