18:28 Then they led Jesus from Caiaphas into the Praetorium, and it was early; and they themselves did not enter into the Praetorium so that they would not be defiled, but might eat the Passover. 29 Therefore Pilate went out to them and said, “What accusation do you bring against this Man?” 30 They answered and said to him, “If this Man were not an evildoer, we would not have delivered Him to you.” 31 So Pilate said to them, “Take Him yourselves, and judge Him according to your law.” The Jews said to him, “We are not permitted to put anyone to death,” 32 to fulfill the word of Jesus which He spoke, signifying by what kind of death He was about to die. 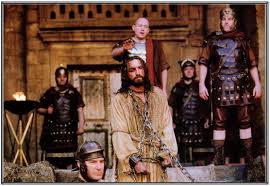 Jesus had said "And I, if I be lifted up, will draw all men to Myself". The Romans executed criminals worthy of the death penalty by hanging them exposed on a wooden cross for days until they finally died. It served a double purpose. One was to obviously free society from the criminal. The other was to deter any would be criminals from ending up in the same position.

Clearly Pilate had no concept of the magnitude of hatred that built up against Jesus. Why would he? Asking a man to carry his bed on the Sabbath was hardly an issue of concern for a Roman governor.

Continuing on yesterday's theme of religious people and the witness or impression we leave on those around us I need to share a story. Growing up through elementary school and high school my best friend had me over at his house on a regular basis playing everything from street hockey, to baseball (wiffle ball) to mini indoor basketball to video games, which were also usually sports. I was a Seventh-day Adventist and he was raised in a home where religion played no prominent role. Looking back now I was the most religious person he knew. I will never forget being at his house one Friday which was a rare occurrence because usually Fridays were school days. Friday is also when Sabbath begins. My parents phoned late in the day to say they couldn't pick me up and could his parents please have me home before Sabbath. As we are driving me home my friend and I are in the back seat and the sun is almost out of sight and he looks at me quite seriously and says "What if we don't have you home before the sun sets? Will God strike you with lightning?" We were young at the time but old enough to be thinking our own thoughts. I'm guessing around 10 or 11 years old.

Here's my point. For my friend my religious life was some separate strange thing that he was not a part of, never saw, and clearly didn't understand. For six days of the week were the same and on the 7th I disappeared. I was MIA. Birthdays, sports events, life events, I missed them all if they fell on that day. For me it was normal. For him it was the twilight zone.

There were two other areas that also stood out for him. My food restrictions and Jeopardy. My friend and I were a bit on the nerds side and as we got older we loved to watch Jeopardy and see how many questions we could answer. It was never many with one exception. Every once in a while there would be a Bible themed category and I would answer them all. I don't think I ever missed one. My friend was amazed and I was always confused as to why people who were smart enough to be on jeopardy could know so little about the most important and influential book in the Judeo Christian world.

So there you have it. After years of constant interaction and friendship my best friend learned that I knew lots about the Bible, couldn't eat hot dogs, and didn't interact with the real world for 24 hours every weekend.

The Jews were to Pilate what I was to my friend. An oddity in the world that He didn't understand even though they were around each other all the time.

This is the reason Pilate tried to send them away. How was he supposed to settle some obscure religious dispute? It would be like me asking my friend to come to my church and moderate a dispute over Sabbath observance or food restrictions.

Here's the strangest part: The world, from all walks of life, we're drawn to Jesus, yet the religious leaders who were so strict they wouldn't even enter Pilate's domain so as to remain 'clean' wanted to murder Him.

It's easy to see which One had the most positive influence on the everyday people.

I don't know about you but I want to be like Jesus. I want to be known for my character, not my oddball religious practices. I want others to see Him lifted up so He can draw them too.

All those years passed and my friend knew I was religious but he never knew my Jesus because I didn't really know Him either. What a waste...
Posted by Pastor Dan at 09:29