18:38 ...he (Pilate) went out again to the Jews, and said to them, “I find no fault in Him at all.
39 “But you have a custom that I should release someone to you at the Passover. Do you therefore want me to release to you the King of the Jews?”
40 Then they all cried again, saying, “Not this Man, but Barabbas!” Now Barabbas was a robber. 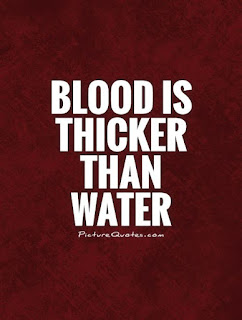 We have an expression in English that "blood is thicker than water" signifying that we take care of our own first - family comes first.

The choice to free Barabbas and send Jesus to be crucified is one full of both irony and deep meaning. Jesus was known by many names and titles. At His birth He was both Jesus (the one who saves) and Emmanuel (God with us). Mary was told by the angel Gabriel that His primary name was to be Jesus because He would save us from our sins. Of course the name Emmanuel was also significant. Jesus told Philip "If you have seen Me you have seen the Father." Why was this so? Because Jesus was God with us, the Word made flesh.

Two other common designations for Jesus were the titles Son of the Father and Son of man. Both titles reflect His dual identity. He saved us (Jesus) by becoming one of us and dying in our place. (Son of man). He also revealed God to us (Emmanuel) by being the son of the Father full of grace and truth.

Let's begin with the irony of the exchange that day. When we compare all four gospels and dig into the commentaries we discover that many ancient manuscripts call the criminal by his full name: Jesus Barabbas. We also discover he was not just a robber but a murderer and a political insurrectionist. You recognize the shared name 'Jesus' but do you know what Barabbas means? Bar = son and Abba = father. The criminal was literally named Jesus son of the father.

Now Barabbas was not just any criminal. He was well known. He was a political zealot making him a threat to Rome. Releasing him was a risk for Pilate as we talked about yesterday. It was also a risk for the Jews because bad relations with Rome could mean a lot less freedoms, perhaps even the loss of the temple. Insurrectionists like Barabbas were dangerous. They were to the Jews what ISIS is to the Muslims - radical extremists who will stop at nothing to secure what they want.

Two men stand before the crowd. Other than a shared name they are complete opposites. They represent two opposite kingdoms. They have two completely opposite fathers. One is the son of the Father. The other is the son of the father of lies who was a murderer from the beginning.

One saved lives, the other ended lives. One brought healing and peace to broken lives and broken hearts. One broke lives and hearts.

Seems such an easy choice. It's like choosing between Superman and any one of his dark enemies. Seems an easy choice yet they chose to keep the murderer and murdered the Son of God, God with us, the One who saves.

Why? Because blood is thicker than water.
John 8:44 "You are of your father the devil, and the desires of your father you want to do. He was a murderer from the beginning, and does not stand in the truth, because there is no truth in him. When he speaks a lie, he speaks from his own resources, for he is a liar and the father of it." - Jesus
They chose family over the Stranger...

One last morsel of irony and deep truth. In the end Jesus Barabbas was a saviour of sorts. He saved us from facing our own sins by the real Jesus facing them for us.

The Word of God is quick and powerful and sharper than a two edged sword. You can't make this stuff up.

Thanks to the real Jesus Son of the Father we have another opportunity to choose. Choose Him today and every day.
Posted by Pastor Dan at 09:30