19:1 So then Pilate took Jesus and scourged Him. 2 And the soldiers twisted a crown of thorns and put it on His head, and they put on Him a purple robe. 3 Then they said, “Hail, King of the Jews!” And they struck Him with their hands.
4 Pilate then went out again, and said to them, “Behold, I am bringing Him out to you, that you may know that I find no fault in Him.”
5 Then Jesus came out, wearing the crown of thorns and the purple robe. And Pilate said to them, “Behold the Man!”
It's not clear in the unfolding story when exactly Jesus' mother arrives on the scene. By the time He is lifted onto the cross later in the day she is there. Is she watching now? Can she see the blood trickling down from the thorns on His head? Is she flashing back to kissing His soft forehead as she placed Him in the manger? Is she running through her head all the words Gabriel told her when he announced she was going to give birth to the Messiah? Are all the confusing and conflicting ideas and emotions about what she expected versus what is before her now swirling in her mind like a violent hurricane?

If Pilate says He is innocent why are they beating Him? Why doesn't he release Him?

What about Peter? Where is he now? Watching in shame? Has he run away in despair at his own epic failure? What about the others?

What about Jesus? What is the expression on His face? Is He composed and peaceful? Is He looking with sadness at His own creation turning violently against Him? Is even He shocked by how quickly the tide has risen against Him? 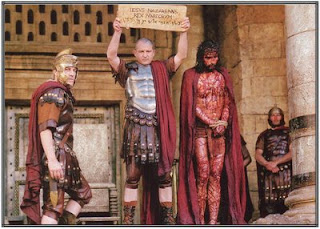 It's the best speech Pilate ever made. Look at Him. He is not a victim. He is not trapped or held against His will. He is indeed the King. His army is at the ready. Had He given the word the entire sea of humanity around Him could have been detained or destroyed in a moment. Pilate believes he is in charge but he is not. Any power he has is given and temporary but Jesus stands eternal. Before Pilate was, Jesus was. Before Abraham was Jesus was. Before Noah was, Jesus was. Before Adam was Jesus was. The events unfolding in Pilate's court could have unfolded differently but the end result would have remained the same. The Lamb is heading for the altar. It was planned in eternity past. Should the Love of the King ever be questioned the questions would be answered by the King Himself. It would not be delegated to anyone lesser. The questions would not be answered with words but with actions. No language skills or lack thereof would prevent anyone from understanding for all can watch the silent demonstration.

Behold the Man indeed. Every action intentional. Every blow willingly received. This is not where He was forced to be. It's where He chose to be. The truth is no one could have forced Him to be anywhere else. It was time. Time to answer all the questions. Time to reveal the heart of the King.