19:15 The chief priests answered, “We have no king but Caesar!”
16 Then he delivered Him to them to be crucified. So they took Jesus and led Him away. 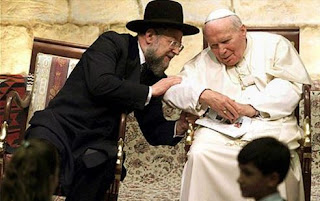 The truth is always messier than that though. Dark stories lurk everywhere and religion is no exception. The reality is that some of the darkest events in human history were perpetrated by the religious. We all understand and accept that every barrel can have a bad apple or two, it is inevitable really. Germany had Hitler. France had Napoleon, Russia had Stahlin and religion has had it's fair share of forgettable villains as well starting with Cain way back in Genesis 4. There we find him being as religiously pious as can be right before slitting his brother's throat.

However there is a great difference between a bad apple and a corrupt system rotten from the top down. The Jewish religion at the time of Jesus is exhibit A of such a phenomenon. I remember well when Mel Gibson was releasing his film "Passion of the Christ" that the media was concerned who in the movie would be cast as the villains for killing Jesus. Would it be Rome or the Jews? No matter how you interpret the film the Bible leaves no doubt. It was the church leadership at the highest level that had Him arrested. It was them that leveled the accusations, took Him to Pilate and then assured a guilty verdict by publicly confessing absolute loyalty to Caesar.

Part of the problem when we read the Bible is that we have our own goals and agendas and biases and we forget that the story we are reading is about real people living real lives in a culture and time far removed from ours. To truly understand we must do our best to understand them before we can hope to understand what their story means for us.

At the time of Jesus the Jews were a somewhat independent nation inside the Roman Empire and ultimately under their authority. Judaism was both a nation and a religion, a concept foreign to us in the West where we strive to keep religion and government separate. Right from the start that puts us at a disadvantage when trying to grasp their culture and circumstances. What it means is that the Chief priests spoken of in our verses today are running both the church and the state. There is, practically speaking, no difference between the two. The laws of the church are the laws of the nation. It would be like being arrested in Canada and dragged before a council because you weren't dressed right according to religious law.

Now the Jews hated being under Roman rule because it meant ultimately they weren't free. It was humiliating to have to get permission from what they considered a pagan gentile nation to do what they felt it was their right to do. In their minds they should be running the world. In their deepest hopes and dreams their Messiah would come and achieve this end through whatever means necessary. Then Jesus showed up and His ways and plans and motives did not fit the bill.

As a result they (the chief priests and religio/political elite) were constantly trying to trip, trap, and trick Jesus. They came one day with a Roman coin and asked if it was lawful to pay taxes to Caesar. The implication was clear. If Jesus said no, the Romans would deal with Him freeing them from any guilt/responsibility for His demise while getting rid of Him at the same time. On the other hand if Jesus said yes He would be teaching the Jews to financially support a pagan gentile oppressor of God's Special People, essentially an act of treason against God. Jesus was trapped they thought...

Fast forward to Pilate's court and these same chief priests are confessing full unreserved loyalty to Caesar as their one and only king. Quite a turn of events! Or is it?

Chameleons are animals that change colour to blend into whatever foliage or surroundings they find themselves in for the purpose of survival. The Jewish leaders were chameleons and their only loyalty was to their own survival and advancement. Despite the external differences they and Pilate were one and the same - chameleons.

What about us? What are we? Do we lie, change our stories, or simply say nothing in order to preserve our position, image, reputation etc..?

Religion is not evil, men are evil. Darkness exists in every organization. No religion or culture is exempt from its murderous influences.

Jesus was a Jew. So was John. So we're Mary and Joseph and Lazarus and so many other beautiful people. Eradicating any religion or culture will not eliminate the darkness but no darkness will overcome the Light either.