19:19 Now Pilate wrote a title and put it on the cross. And the writing was:
JESUS OF NAZARETH, THE KING OF THE JEWS.
20 Then many of the Jews read this title, for the place where Jesus was crucified was near the city; and it was written in Hebrew, Greek, and Latin. 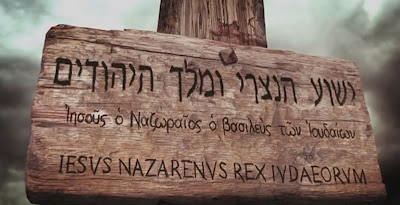 Approximately 32 years previous to this moment a large caravan of people on camels arrived from "the east" in Jerusalem. They came from Midian and Sheba and Ephah. They went straight to the palace of Herod the Great. They asked him a simple question that shook him to his core. "Where is He who is born King of the Jews? We have seen His star in the east and have come to worship Him."
John introduced Jesus not as a baby in Bethlehem. He looked back much further. Back beyond the first human being. "In the beginning was the Word... by Him all things were made... He became flesh and dwelt among us and we beheld His glory..."

King of the Universe, to King in a cradle, to King on a cross. Even self-obsessed pagan Pilate recognized Him for who He was. He just didn't have the courage or character to do anything about it.

When He was born gifts were brought to Him. When He died He unleashed the greatest gift humanity has ever received - Love in action, the heart of God on full display, Truth over lies and freedom finally to see Him as He is.

It all started with a baby born to poor parents and placed in a feed trough. It ended with a message written in every common language on a hill at the crossroads of the world.