19:31 Therefore, because it was the Preparation Day, that the bodies should not remain on the cross on the Sabbath (for that Sabbath was a high day), the Jews asked Pilate that their legs might be broken, and that they might be taken away. 32 Then the soldiers came and broke the legs of the first and of the other who was crucified with Him. 33 But when they came to Jesus and saw that He was already dead, they did not break His legs.

Dying by crucifixion was designed to be slow and torturous. Death took days. For those of you who watched Mel Gibson's 'The Passion of the Christ' you know how much emphasis was placed on the physical torture of Jesus. However when reading the account and considering the facts we know about crucifixion Jesus died way too soon. Not only did He die quickly but He died fully alert. Neither of these things are consistent with death by crucifixion.

So what happened? We know from the other gospels that Jesus died at 3 pm. Sabbath hours were fast approaching and the Jews would not permit anyone to be on a cross over the Sabbath hours. This would mean they had to be taken down before the setting of the sun. That was coming fast and so almost before they were put on the cross they were being prepped to be taken down again.

Preparation meant breaking their legs, partly as further torture and partly so they had no chance of escaping once taken down. We must remember that most crucifixion victims were political insurrectionists and the possibility of a rescue attempt by their followers was always a possibility.

When they came to break Jesus' legs He was already dead. Some will argue He died faster because He was beaten more severely. This is highly unlikely for two reasons. The first is that the Romans were not known for mercy so the other two would have been beaten also. When you consider the fact Pilate didn't want to kill Jesus anyway, it's even more unlikely Jesus was beaten more severely. The second reason it's unlikely that Jesus died so quickly from physical injury is that as we already said, He was fully aware right until the end.

The truth is no one killed Jesus. He was the Lamb slain from the foundation of the world. He came to die. He gave His life a ransom for many and when the mission was complete He died on His own terms. 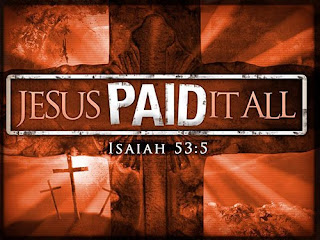 Recently I was told that the cloths used to wrap Jesus as a baby described in Luke 2 were cloths that travelers took with them in case someone died on the long journey. The body would then be wrapped in the cloths until burial could take place. The practice of wrapping the dead was the norm then as we saw with the death of Lazarus. The theory then says Mary used these cloths to wrap Jesus before placing Him in the manger. The theory can't be confirmed but seems plausible and either way the wrapping of a baby in cloths is similar to that of wrapping the dead. Even more of a foreshadowing if His mission was the fact the visitors from the east brought myrrh which was used for burial. Even stronger than that are the words Isaiah penned 800 years in advance: "He was oppressed and He was afflicted, Yet He opened not His mouth; He was led as a lamb to the slaughter..." Isaiah 53:7

The Psalmist wrote that His bones would not be broken. (34:20)

In every detail large and small Jesus is the One and He died for us of His own choosing. Anyone can be killed but few demonstrate love by giving their life. Only One gave His life for His enemies.

He completed His mission just before Sabbath so we could all rest. Think about that...
Posted by Pastor Dan at 22:40