20:1 "Now on the first day of the week Mary Magdalene went to the tomb early, while it was still dark, and saw that the stone had been taken away from the tomb."

Mary came alone before dawn even began to break. Through the streets she made her way in the inky blackness. The city gates were closed. How she got out we are not told. Did she convince a guard to let her out? Did she drop out a window in the wall? Did she know of a gate that she could let herself out of? If a night watchman on the wall heard her or saw her form moving through the darkness would he shoot at her? Was Mary potentially risking her life just to visit His tomb? Why? Couldn't she wait until morning?

Religion worries so much about rules when love will do things rule keepers wouldn't even consider doing.

Do you remember Joseph the favourite son of Jacob who was sold by his brothers to traders who then sold him to Potiphar in Egypt? Joseph grew up on his father's knee hearing the stories of Abraham and Isaac and the things God had done for and promised to do for their family. He had dreams from God about his own future. Then at 17 his brothers sold him off and told Jacob he was dead. Down to Egypt he went. A land that served other gods, spoke a different language, and was far removed from anything and everything familiar to him. Where was the God of Abraham now? Where was the One who rescued Lot first from raiding kings and then from the destruction of Sodom? Joseph seemed far from Him yet he chose to honour Him by being the best servant he could be. Potiphar's confidence in him grew until Joseph became the head of Potiphar's house, second only to Potiphar. Serving as the army general Potiphar was often away for long periods of time. Potiphar's wife was left alone and lonely and her thoughts and desires turned to Joseph. He was young, strong, handsome, and there for her when her own husband was not. She made advances towards him. Subtle ones at first but then stronger and stronger. Finally one day she grabbed him insistent that she have from him what she desired. 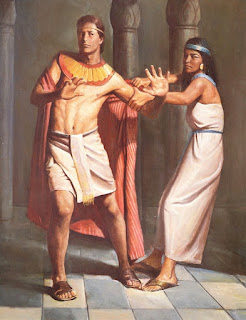 Joseph was a young single man full of the sexual desires God gave us. She was likely a very beautiful woman. They were alone. He was far from home, far from the rules of his upbringing, from the restrictions of his religion. In Egypt things were different. In Egypt desire was permission. In Egypt the only law was lust. Potiphar would never know. Besides was he not to care for everything that belonged to Potiphar? The same serpent who deceived Eve was loading Joseph's mind with every conceivable reason why giving in to the desires of Pharaoh's wife was ok. I mean why be loyal to a God and a moral code that had abandoned him?

Yet Joseph didn't give in. Instead he fled leaving the coat she was tugging on in her hands. His parting words were "I cannot do this thing and sin against my God!"

Joseph was not controlled by rules or guilt or devotion to Potiphar. For Joseph it was personal. It was love. It was devotion to his God. Even though Joseph was far removed from all that was familiar to him the Scriptures tell us simply "God was with Joseph." The relationship they had was the driving force of his life. It trumped everything else.

Mary went to the tomb in the middle of the night for the same. Her love for Jesus trumped everything else. Listen to what my favourite author wrote about Mary:

"Mary had been looked upon as a great sinner, but Christ knew the circumstances that had shaped her life. He might have extinguished every spark of hope in her soul, but He did not. It was He who had lifted her from despair and ruin. Seven times she had heard His rebuke of the demons that controlled her heart and mind. She had heard His strong cries to the Father in her behalf. She knew how offensive is sin to His unsullied purity, and in His strength she had overcome.

When to human eyes her case appeared hopeless, Christ saw in Mary capabilities for good. He saw the better traits of her character. The plan of redemption has invested humanity with great possibilities, and in Mary these possibilities were to be realized. Through His grace she became a partaker of the divine nature. The one who had fallen, and whose mind had been a habitation of demons, was brought very near to the Saviour in fellowship and ministry. It was Mary who sat at His feet and learned of Him. It was Mary who poured upon His head the precious anointing oil, and bathed His feet with her tears. Mary stood beside the cross, and followed Him to the sepulcher. Mary was first at the tomb after His resurrection. It was Mary who first proclaimed a risen Saviour." Desire of Ages pg 568 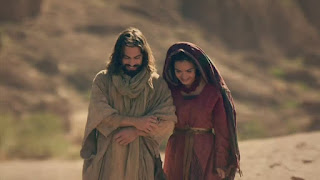 No rules dragged Mary from her bed through dark streets to the fateful hill outside the city walls. Guilt did not drive her there. Penance did not carry her there either. It was not a pilgrimage to earn favour with God. Mary went because she didn't want to be anywhere else. Love moved her - nothing more and nothing less. She just wanted to be where He was even if He was dead.

The things we do for love will always exceed the things we do out of duty because love is the most powerful force in the universe and Love Wins.
Posted by Pastor Dan at 11:40