20:11 But Mary stood outside by the tomb weeping, and as she wept she stooped down and looked into the tomb. 12 And she saw two angels in white sitting, one at the head and the other at the feet, where the body of Jesus had lain. 13 Then they said to her, “Woman, why are you weeping?”

How much of our heartache and suffering is necessary? How many of our tears fall simply because we either don't know or don't believe? 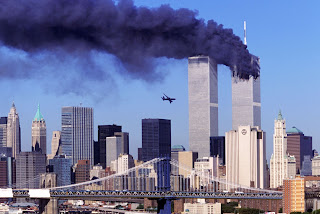 It was September 11, 2001 and Susan had been working at her desk for about half an hour when suddenly a ripple of gasps and shocked horror went through the cubicles in her office. Looking up she saw people staring at the television screens mounted on the walls around the room. Others were rushing to the windows to see the smoke rising up from the World Trade Center. As they stood there a second plane approached and with helpless horror they watched as it slammed into the second tower. Susan let out an indescribable sound from deep within her as she crumpled to the floor weeping. Her husband worked in the top of that building. Her coworkers tried to console her. Suddenly she tried to get up. "I have to find him!" she kept muttering as she attempted to pull herself together.

She stumbled to her cubicle while her coworkers tried to guide both her actions and her thoughts. Arriving there she fumbled for her keys and her phone. As she touched her phone it began to vibrate. Turning it over she saw "12 missed messages". It turned out her husband had gotten stuck in traffic and had been trying to let her know he was safe for the past half an hour but she had noticed the blinking light indicating text messages were waiting. Her moments of horror thinking her husband was gone could have all been avoided.

Is she alone? Is she the only one who has suffered much more than she would have had she gotten the message?

"Woman why are you weeping?" Usually the first words from an angel to a human are "Fear not" but Mary is too distraught to be afraid. Jesus is either dead and His body is missing or He is alive but gone. Either way He's gone - at least based on the information she has absorbed that is the case.

"Woman why are you weeping?"

It's hard to know what Mary's reaction was to this seemingly harsh ignorant question but it's likely she is too upset to be offended. To her it would be like asking someone with a freshly broken nose why they are bleeding. However the question is meant to arrest her thoughts, to get her attention. "Why are you weeping?" What is the reason? Should you be? You sat at His feet. You paid attention to His words more than anyone else. Didn't you hear Him?

Jesus spoke openly about what would happen to him: His death and His resurrection from the dead. "The Son of Man must suffer many things and be rejected by the elders and the chief priests and the scribes and be killed, and after three days rise again" (Mark 8:31; see also Matthew 17:22; Luke 9:22).

He also spoke of it in other ways. For example, Jesus said that if his enemies destroyed the temple (of his body), he would build it again in three days (John 2:19; Mark 14:58; cf. Matthew 26:61). He also spoke allusively of the "sign of Jonah" - three days in the heart of the earth (Matthew 12:39; Matthew 16:4). And he hinted at it again in Matthew 21:42 - "The very stone which the builders rejected has become the head of the corner."
"Woman why are you weeping?"

Let's face it, Mary is neither the first nor last to weep inconsolably by the grave of a loved one. Adam and Eve were the first to do so at the graveside of their murdered son, killed by his own brother. They certainly had reason to weep but the angel has gently rebuked Mary. Her tears are misplaced. Her heart that only wants to be where Jesus is has deafened her to what He said. Her emotions have choked out the message or her bias prevented her from ever hearing it.
Either way the result is the same. She is weeping over a tragedy that is no tragedy at all.
Now consider these words:

1 Thessalonians 4:13 "But I do not want you to be ignorant, brethren, concerning those who have fallen asleep (died), lest you sorrow as others who have no hope. 14 For if we believe that Jesus died and rose again, even so God will bring with Him those who sleep in Jesus."

You see God has sent us a Text message before the apparent tragedies of this life ever occur. Some have never gotten the message and are left to weep and wonder where their loved one went. Others got the message but for whatever reason(s) didn't believe it.

What will we do with God's Text messages? Are we reading them? Do we believe them? Are we weeping blindly over tragedies that are not as bad as we think?

1 Thessalonians 4:15 For this we say to you by the word of the Lord, that we who are alive and remain until the coming of the Lord will by no means precede those who are asleep.16 For the Lord Himself will descend from heaven with a shout, with the voice of an archangel, and with the trumpet of God. And the dead in Christ will rise first. 17 Then we who are alive and remain shall be caught up together with them in the clouds to meet the Lord in the air. And thus we shall always be with the Lord. 18 Therefore comfort one another with these words.
Posted by Pastor Dan at 10:24