20:11 But Mary stood outside by the tomb weeping, and as she wept she stooped down and looked into the tomb. 12 And she saw two angels in white sitting, one at the head and the other at the feet, where the body of Jesus had lain. 13 Then they said to her, “Woman, why are you weeping?”
She said to them, “Because they have taken away my Lord, and I do not know where they have laid Him.”
14 Now when she had said this, she turned around and saw Jesus standing there, and did not know that it was Jesus. 15 Jesus said to her, “Woman, why are you weeping? Whom are you seeking?”
She, supposing Him to be the gardener, said to Him, “Sir, if You have carried Him away, tell me where You have laid Him, and I will take Him away.”

I don't want to push the point past it's best before date but can you see how committed Mary is to her belief that the body of Jesus has been stolen? 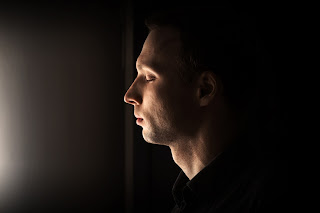 One if the major themes of the gospel of John is blindness. Jesus comes into our darkness as the Light of the world and still we can't see Him. The darkness cannot comprehend what it is seeing. Seeing we don't see and hearing we don't hear.

Almost the entire Jewish people rejected and ultimately crucified their own long expected Messiah because His character and message didn't fit their carefully crafted and detailed script that had been refined for generations. They saw Him and heard Him but their bias prevented them from seeing or hearing Him.

Now Mary is in the same boat. She is 110% convinced Jesus is dead and that His body has been taken. Peter and John's discovery of the folded napkin did not dissuade her at all. The sight of angels in His tomb didn't cause her to question her view of events. Now Jesus is before her and speaking to her but her bowed head and tear filled eyes prevent her from seeing Him and her emotional state and desperation to find His body so she can complete the task she has come for prevent her from recognizing His voice or the familiar greeting.

In short she is blind in every way. All she can "see" is her own view of the situation.

Have you ever listened to two people argue and realize they are actually agreeing but are both too blind to see it? Ever been one of the arguers?

First Jesus leaves physical evidence of His resurrection. Mary doesn't see it. Then He sends a friend to share with her the evidence. Her emotions and false conclusions prevent her from "seeing" it. Then He sends angels. Still no change. Finally He comes Himself.

"You will search for Me and find Me when you search with all your heart even though I was never far from you." - Jesus

If we remain blind to His presence in our lives it won't be because He didn't try everything. If you want to be truly courageous and see things you've never seen before, be willing to question everything - yes everything - everything.

Nathaniel (my 9 year old son) and I had the most amazing conversation driving home Sunday night. He told me sometimes he wonders if people just made up the Bible. I could have argued but how could I argue in the face of such honesty? Instead I told him the truth. "I used to wonder that too." Question everything means question everything and nothing needs to be questioned more closely than what we think we know about God. What the Jews thought they knew caused them to want to murder their Messiah and what Mary thought she knew left her weeping far longer than necessary.

Open your mind and heart and eyes and ears. It will be frightening but it is necessary or you will never find Him even though "I was never far from you." - Jesus
Posted by Pastor Dan at 21:42