20:16 Jesus said to her, “Mary!”
She turned and said to Him, “Rabboni!” (which is to say, Teacher).
17 Jesus said to her, “Do not cling to Me, for I have not yet ascended to My Father; but go to My brethren and say to them, ‘I am ascending to My Father and your Father, and to My God and your God.’”
18 Mary Magdalene came and told the disciples that she had seen the Lord, and that He had
spoken these things to her.

Did you think about it? Did you consider the impossibility of Jesus taking our punishment on Himself by burning endlessly in fire? If you can see it yet don't worry about it. Mary could only see her version of what must have happened until Jesus Himself showed up and proved otherwise. Now she has returned to tell the disciples what she saw, Who she saw, and they don't believe her either. 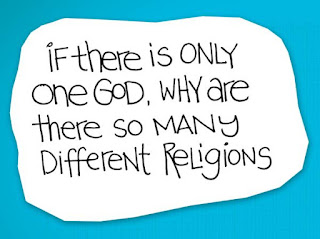 Ironic isn't it. Peter and John found proof in the tomb that He was alive but she didn't believe them because it didn't fit her story. Now they don't believe her because it doesn't fit their understanding. Jesus told them He was leaving and where He was going they could not come yet. That's why they went directly home from the empty tomb. Jesus was gone and wherever He went they couldn't come.
Now do you see why there are so many religions and why religion is such a divisive and sometimes violent enterprise? People are the problem. Some of us are a problem because we have taken a little bit of truth and added a whole narrative to it and we can't see or hear anything that doesn't fit our narrative. Others of us are not only convinced we know but insist everyone else must see it like we see it. Still others don't believe anything but they see in religion an irresistible opportunity to control others so they pretend they believe and twist the Story to suit their purposes. That's what Caiaphas meant when he said it was better for one man to die than to lose the entire nation. He and his accomplices had a lucrative and effective system in place and Jesus was threatening to undermine the whole thing simply by freeing the people through Truth telling. Jesus said plainly "You will know the Truth and the Truth will make you free and you will be free indeed."

Mary didn't believe until she saw Him for herself and then the disciples wouldn't believe because they heard what He said so she had to be mistaken. Pride, arrogance, stubbornness, etc... all play a role in turning religion into a divisive monster instead of a life changing amazing journey into the heart of the King.

I don't know how bad the current religious war between Extreme Islam and everyone else will get but I do know we'd all see things very differently if we set aside our pride, our narratives, our need to be right, our arrogance, our prejudice and our stubbornness.

We may not agree on all the details but imagine what would happen if we realized that it isn't a correct dogmatic alignment with a particular narrative that saves any of us. Jesus already saved all of us. He is the Lamb that took away the sin of the whole world and all we have to "do" is believe Him. (John 6:29)

There will always be details that cause us to look across the table or across the room or across the world or stare at our computer screen and think "How could they be so blind". In those moments they may be blind or maybe we are blind or maybe both sides are blind. That's why it's best to be humble, slow to speak, and abounding in love. The Truth will always come clear for all to see. In the meantime let's not be abusive about being "right".
Posted by Pastor Dan at 10:08