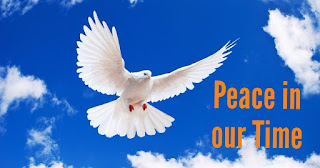 Peace - It is a common word. As far back as I can remember the world has been in search of peace. In my elementary school we celebrated World Peace Day every year. Now called International Peace Day it falls on September 21st. More than anywhere else the world's focus for peace and peace talks seems to center around the Middle East. Ironically whether you subscribe to the Biblical account of creation, theistic evolution, or even atheistic evolution, everyone agrees that human civilization began in Mesopotamia, the fertile crescent, the heart of the Middle East.

In other words the place where humans have lived the longest is the furthest from finding peace. I'll let you ponder that reality...

The Bible speaks lots about peace. Just to give you some perspective the word hate occurs 172 times in the Bible. The word love can be found 500 times and peace occurs 397 times.

Some of the references to peace are unexpected. In Matthew 10 Jesus told His followers "Do not think I came to bring peace on the earth. I did not come to bring peace but a sword." Paul speaks of "a peace that passes understanding."

John has some key things to say about peace from the lips of Jesus. Here are a couple of them:

John 14:27 "Peace I leave with you, My peace I give to you; not as the world gives do I give to you. Let not your heart be troubled, neither let it be afraid."

John 16:33 "These things I have spoken to you, that in Me you may have peace. In the world you will have tribulation; but be of good cheer, I have overcome the world.”

Take careful note that both of these significant statements were made to His disciples the night before He died. Is it a coincidence that He went to His death speaking about peace to His followers and then the first thing He says after His resurrection is "Peace be with you."? In fact He will repeat it twice more before this brief time with them is over.

So what's going on? Jesus says He came to bring a sword and not peace. He said in this world we will have trouble. How can we have peace if He came to bring a sword and guaranteed a life of trouble?
It's a key question. It's a question He wants us to ask. If you are familiar with Jesus at all you know He makes provocative statements, even apparently contradictory statements.

Here's why: There are two very different kinds of peace. The first is the peace of agreement. As long as we all agree there is peace. This is why when there is no agreement and no peace as a result the two sides that are in conflict are brought to a common table usually with a third party present to enter into peace talks. The goal though usually elusive is simple. You talk until agreement is reached and peace is restored. Not only is this kind of peace elusive, it can also be deceptive. History is full of examples where people were in peaceful agreement that lead to trouble. Slavery is a huge example. The majority agreed that it was OK. There was peace about it for a long time. Peace for the owners that is but peace built on evil will only lead to trouble.

Tomorrow we'll explore what Jesus meant when He said He came to bring a sword and not peace. See you then...
Posted by Pastor Dan at 19:09