Why is Jesus offering peace if He already said He didn't come to bring peace but a sword? Maybe we ought to consider what His sword is first. Some of you already know and now the rest of you know that God's sword is His Word. His Word is His Son. So Jesus Himself is the sword and His very presence and character cause division. Some stand firmly with Him while others stand determinedly and violently against Him.

Before Jesus showed up the Jewish nation was united. They were expecting a Messiah, a deliverer. He was going to be mighty and raise the nation to greatness again. The power of the Romans would be broken. He would sit on the throne of David and be more successful than Solomon. Peace and prosperity would abound. Let the good times roll. 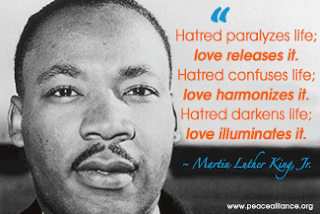 Then Jesus showed up. He spoke about character issues. He reached out to the disenfranchised. He crossed borders and showed compassion to hated foreigners. He had no interest in politics or in working with the corrupt religio/political establishment. He respected Roman authority. He even helped a centurion. He respected women and involved them in His work. He ate with prostitutes, tax collectors, and sinners. The nation became confused. The peaceful unity they had enjoyed was gone. Some saw in Him hope and light. Many others wanted Him dead.

The truth is there are two kinds of peace. The first kind is the peace of agreement. It is achieved by getting everyone to think the same way. Sometimes this is ok but it's lethal when everyone is comfortably united in believing a lie.

It pains me to bring this up but it illustrates the point perfectly. The great German reformer Martin Luther was one of the most influential men of European history. He took the Word of God and stood up against a corrupt Church. His stand brought conflict to homes, churches, nations, and an entire continent. However Martin Luther had a blind spot in his character. He was a hater of Jews. He wrote books about it. Because He was so influential and revered by the German people, his prejudice fueled theirs. The Holocaust under Hitler would have been impossible had the seeds of hatred not been planted and watered by Luther and his books.

Today a new hatred is forming in North America against Muslims. People who think alike on the issue are banding together. Political aspirants are using this common fear and growing hatred to rally support. History has proven that peace based on lies that unite people will end in bloodshed and regret.

The Jews of Jesus' time were taught to hate everyone but Jews. They saw their Messiah as one who would elevate them above the nations. National pride and prejudice against all others united them but it was a unity built on lies piled up over centuries.

Jesus loves them too much to let them self destruct and drown in these inherited lies. He came to bring the sword of His character into their peaceful but lethal national stupor. He came to replace that false sense of peace with one altogether different and we'll talk about that tomorrow...
Posted by Pastor Dan at 09:09