20:19 "Then, the same day at evening, being the first day of the week, when the doors were shut where the disciples were assembled, for fear of the Jews, Jesus came and stood in the midst, and said to them, “Peace be with you.” 20 When He had said this, He showed them His hands and His side. Then the disciples were glad when they saw the Lord."

Last night I was part of another conversation about different Bible translations. While it is true that some are better than others, it is also true that the Story is found in all translations. What is even more important to remember is that even the best translations will miss certain nuances because different languages do not always have equivalent words. Today I want to bring one of those out but first I want to explain how it happened. It did NOT happen because I am a Greek expert. It happened because I was following the Story.

As we covered yesterday the eleven are huddled in fear. They are also drowning in grief and disillusionment. This was not supposed to happen. Jesus was not supposed to die. However, far worse than His death not fitting their religious/theological expectations, they missed Him. He was their master. They were His disciples. Their entire lives revolved around Him and now there was this huge hole where He used to be.

On top of the fear of the angry mob and the sadness, they also were feeling incredible guilt. They had all promised they would stand with Him but when the pressure came they all fled. Now they are living with the knowledge that they abandoned Him when He needed them most.

It is into this somber place that Jesus comes. You have to realize/remember that we project our character and feelings onto others and onto God. We expect them to treat us as we would treat them had they done what we did. Because of their abandonment of Him and the subsequent guilt, they expect Him to be angry, even vengeful. Remember Adam and Eve huddling in fear in the garden trying to hide from Him? Same deal.

Now taking all that into consideration I found the English translation odd. It just says "They were glad when they saw the Lord." It seemed weak to me. It didn't match the intensity of the situation. It didn't fit the Story. For that reason I looked up the literal definition of the Greek word that was translated 'glad'. 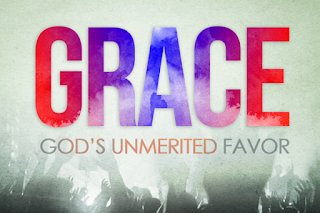 Turns out a variety of English words were used in different translations but they all fall short because
there is no English equivalent. The Greek word comes from the same root as the Greek word for grace. It means to be happy because of grace. Now do you see how it fits the Story? Try were expecting some kind of anger or punishment or worse disappointment from Jesus. They expected it but it never came. Where vengeance could have been they got grace and they were glad. Grace. For treason they got grace. For failure they got grace. For cowardice they got grace.

The disciples found grace and favour when they saw the Lord. That's the translation of the Story.

Stop sweating the trees and embrace the forest. Follow the Story and you will find the heart of God.
Posted by Pastor Dan at 08:59