This section of Scripture seems awkward and much has been done with it. I hope by now we have learned to remain in the Story and seek understanding consistent with the Story. I will admit that the translation does not help in deciphering of what exactly was meant here. Words have been added to try and make sense of the passage. Unfortunately the added words only add confusion.

First the context: The eleven are full of fear, guilt, and shame. The guilt and shame are the direct result of their catastrophic failure to stand by and with Jesus in His arrest and crucifixion. Instead they either ran away or stood by and watched while denying with cursing that they knew Him at all. All this after having promised to die for and/or with Him if necessary.

Guilt is a powerful life sucking force. Shame is debilitating. Jesus steps into their guilt and shame offering grace and peace. His message and presence convey one simple truth. "I forgive you." Forgiveness is tricky in that it takes two. Jesus has forgiven them but they have not forgiven themselves. We will see that more clearly as the Story unfolds.

Make no mistake. The end result of guilt, shame, and unforgiveness is death. Jesus apparent mystical act of breathing on them while in this condition is actually a parallel of Eden when He breathed into the lifeless form of Adam. The Bible defines life not as physically breathing in and out and having a heart beat etc... but it is more than that. Truly living is being vitally connected with God. Paul wrote "you who were dead in trespasses and sins are now made alive in Christ because He forgave all your trespasses" (Col. 2:13)

This is not just some legal jargon. Unresolved issues in a relationship kill the relationship. The disciples consider their journey with Jesus to be over, not because of Him but because of them. They are unworthy to take another step with Him. Jesus knows how they feel so He comes in peace offering grace and forgiveness. He breathes life back into them. His words "Receive the Holy Spirit" can just as accurately be translated "receive the sacred breath". In other words "Live again!" 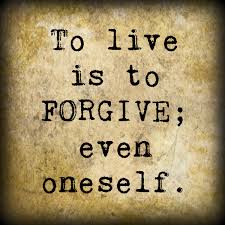 I believe given the Story this is the accurate rendering of His words. Why? Because look at what He says next: "Any sins you forgive are forgiven and any sins you retain are retained."

What Jesus is saying is pretty simple when you stay in the flow of the Story. "I have forgiven you and if you also forgive then it's over and gone and we can move on together but if you don't forgive then the guilt and shame remain and we can never move on."

As a pastor I can't tell you how many people I have met who are stuck in their own guilt and shame. I have been there myself. Then one day God kind of hit me over the head with this thought "What makes you so special and elite that I can forgive murderers, adulterers, liars, and traitors but I can't forgive you? Why are you holding on to what I have already let go of?"

Perhaps there is something you have done that you just can't let go of. Breathe again. Let it go. Jesus already has but forgiveness is two sided. If you insist on holding on to your guilt and shame they are retained...
Posted by Pastor Dan at 10:07