It is often said that seeing is believing. It reminds me of a story a friend of mine told me. He, his wife, and another couple were vacationing together at a resort. One evening as he and his wife were passing by the pool they both saw the husband of the other couple in the pool with another woman. Just as they were wondering what he was doing the two started kissing quite passionately. My friend said he was sick to his stomach. He and his wife quickly went inside and discussed how they were going to break this news to their friend. A few moments later they were at her door. After a knock or two the door opened and there he was, completely dry and dressed. The same man who was in the pool kissing another woman was also in his room with his wife. My friend and his wife both saw with their own eyes and were both sure but were both wrong. 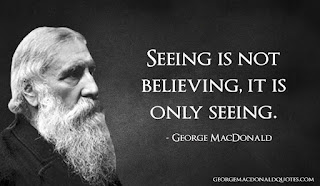 We have another expression too: Don't believe anything you hear and only half of what you see.
Thomas as a skeptic by nature we assume. It could also be that he was trying to protect himself from disappointment. Either way he was not buying the tale that Jesus was alive and had talked to the others. He had to see Him for himself. In our culture such cautious independence is seen as wise. Is it?

If you have ever had someone you love doubt you based on circumstantial evidence you know how painful that is. When you have a relationship with someone you expect to be able to believe them and that they will believe you. However we are all flawed and the best of us are sometimes not much better than the worst of us. This being the case skepticism is understandable. I mean the same men telling Thomas they had seen Jesus were the same men who told Jesus they had His back no matter what.

So how do we navigate the tension between trusting our spouse or our parents or our best friends and trusting the evidence that suggests they might be lying? Thomas navigated by sticking to the old adage "I'll believe it when I see it."

Tomorrow we'll find out how that went and what it might mean for us.
Posted by Pastor Dan at 11:18