20:26 And after eight days His disciples were again inside, and Thomas with them. Jesus came, the doors being shut, and stood in the midst, and said, “Peace to you!” 27 Then He said to Thomas, “Reach your finger here, and look at My hands; and reach your hand here, and put it into My side. Do not be unbelieving, but believing.”
28 And Thomas answered and said to Him, “My Lord and my God!”
29 Jesus said to him, “Thomas, because you have seen Me, you have believed. Blessed are those who have not seen and yet have believed.”

Eight days later... where has He been? We are not told so we'll never know but it's interesting to speculate about. Has He been traveling around visiting the many people and places He went throughout His ministry? Has He been encouraging them like He came back to encourage the disciples? 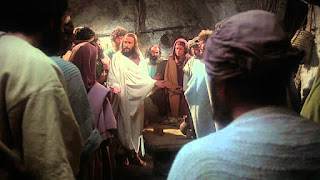 It is also interesting that His first words are the same words He said to them eight days before. What are we to conclude from that? It seems the cloud of fear, guilt, and shame is still hanging over them. Perhaps the unbelief of Thomas has caused them to question everything all over again. I mean it has been eight days. If Jesus is really back where is He? Why doesn't He stay with them like He used to? Why did He so mysteriously appear and then disappear?

When I stop and place myself in their place it isn't much of a stretch to sympathize with their mental state. Two weeks earlier Jesus entered Jerusalem on a donkey to the cheers of the crowds and it seemed that finally everything was falling into place. He would ascend the throne of David and bring the nation back to the glory it once had and even better, just as they had always been taught. Now two weeks later nothing makes sense. First Jesus dies. If that wasn't bad enough everyone one of them abandoned Him for the sake of self-preservation. Ever since then things have gone from bad to weird.

Mary said His body was stolen but the evidence suggested He was alive. Mary then said she saw Him and talked to Him but that He was going to His Father. Then at the end of that same day He entered a locked room without opening the door and spoke with them briefly before leaving again. Now eight days have passed. Eight days to do nothing but think. Think about how surreal it all is. Think about the hatred that exists among the people and especially the religious leaders for Jesus and His followers. Think about what to do next. Their thinking is interrupted by Thomas first. He was not there when Jesus came the first time and he wasn't buying any of it. Perhaps he was truly skeptical or
perhaps he was afraid to allow himself to hope. Sometimes our skepticism is only veiled self-preservation. We want to believe but fear of pain and disappointment prevents us from taking the leap.

Either way Thomas' unbelief has had its effect on the others. If Jesus really is alive where is He? It makes no sense that He came back only to disappear again.

Then without warning He is back. No knock on the door. Who needs to knock when He can walk right through?

Then He turns to Thomas and without being asked addresses his doubts.

Thomas had no excuse for his skepticism but Jesus came to him anyway. That's the kind of God He is.

Do you remember Jesus' last words to them the last time He saw them? "As the Father sent Me, so am I sending you."

He sent them but they have not moved. They are in the same room they were when He left them. Nothing has changed. They are stuck. Again He could have yelled at them or lectured them or belittled them or any of the other negative things we do to manipulate people to do what we want. He didn't. Love doesn't do that. Love sees past the surface behaviour to the source. They don't need a lecture, they need more encouragement. In spite of all the "obvious evidence" they have been on an emotional roller coaster we can only imagine. Their default belief system fed to them from infancy backed by generations of like thinking has been shattered and the One who shattered is dead but not dead and present but absent.

"Look at my scars again. It's really Me."

Lesson: If you are down and out Jesus won't leave you there. He'll come to you. He'll find a way to break through your fear, shame, guilt, skepticism, or any other wall that needs to come down. He will never quit on you. Love never quits.