20:29 "Blessed are those who have not seen and yet have believed.” 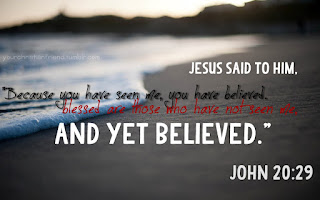 Jesus told Thomas that believing without seeing is better than believing after seeing. Those who believe without the benefit of irrefutable proof are blessed. Blessed how? Blessed why? Does God Love them more? Surely not because God demonstrated His love by sending Jesus while we were still in rebellion and unbelief. God's love is stronger than death and unchangeable. So if our belief without sight doesn't alter His love for us what is the blessing?

Let's work backwards. What blessing did Thomas receive when he saw and felt the nail scars in Jesus' hands and feet and the scar left from the spear in His side? What blessing did he receive from the undeniable revelation that the Man in whom he had placed all his hopes and dreams was alive even though He had been dead? What blessing was there in knowing that the One he had trusted up until it got dark on Friday was infinitely more than he had ever conceived of? More powerful, more amazing, more capable, more Godlike, more out of this world, more and beyond his wildest dreams. He was all that and more still. More gracious, more forgiving, more compassionate than anyone he could ever imagine.

In seeing Jesus he could now see beyond the limits of everything he had ever known. Before him stood the proof that death is not the end, that the wildest promises of God are not just a fairy tale, but tangible. Barriers for men are no barriers for Him. Hope welled up in him in that moment like he had never known. It was like stepping into an alternate dimension where all is possible.

Would we call this new discovery a blessing for Thomas? I think to call it less would be folly.

Now that we have scratched the surface of what Thomas received as a blessing when he saw and felt Jesus can we now get a sense of what Jesus meant when He said "Blessed are they who have not seen and yet believed?"

"Abraham longed to see my day, he saw it and was glad." - Jesus

Do you see why that is such a blessing? Those who must see in order to believe must live in uncertainty. They must suffer the angst of unbelief teetering on the edge of hopelessness. They must live in the far country envying pigs when the comforts and peace of Father and Home were available the whole time.

How many today live in fear and uncertainty?

"Blessed are they who have not seen yet have believed." - Jesus

One day soon our faith will be sight.
Posted by Pastor Dan at 09:20