21:6 And Jesus said to them, “Cast the net on the right side of the boat, and you will find some.” So they cast, and now they were not able to draw it in because of the multitude of fish.
7 Therefore that disciple whom Jesus loved (John) said to Peter, “It is the Lord!” Now when Simon Peter heard that it was the Lord, he put on his outer garment (for he had removed it), and plunged into the sea...

The English translation here is interesting. The Greek literally says "He put on his outer garment (tunic) for he was naked, and plunged into the sea."

Before you plunge to the wrong conclusion here is the definition of the Greek word referring to his clothing or lack thereof before he put his outer garment on. 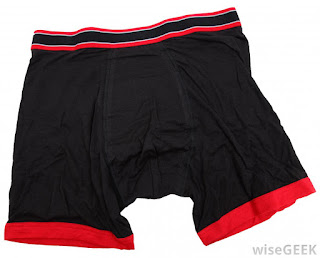 When I was a kid, maybe 12ish, I got up and was eating breakfast alone in the kitchen in my underwear. Suddenly there was a knock on the door. The door that came into the kitchen from outside. We lived in the country and people popping in at breakfast time was a rarity. So there I sat in my underwear and the only way out of the kitchen was past the door. The worst part was I had forgotten I was only in my underwear and said "come in!" In came my cousins (5 children) and they had friends with them and some were girls. I started talking to them and suddenly realized I was in my underwear. I'm sure my face turned crimson and my cousins started to giggle as I had to literally press through them to get out of the room into the rest of the house so I could get to my room and get dressed. I wasn't naked but I sure felt like it.

Think about it. You can't put on an outer garment unless you have an inner or undergarment.

However the interesting question to ask is “Why does John include this detail at all?” It certainly doesn't make much sense. You take off clothes to go swimming usually, you don't add them. The fact he jumped into the sea implies a spontaneous urgency yet before being spontaneous he puts his tunic on. It doesn't fit. Besides Peter and Jesus lived together and traveled together for over 3 years. I'm pretty sure Jesus has seen him without his tunic on before.

What is going on here?

Have you ever done anything physical that was really about your state of mind and had little or nothing to do with your body?

It's well documented that most if not all women want to shower as quickly as possible after being violated but is the shower really about washing? Children will carry a blanket or stuffed animal everywhere but is it really a physical thing? We pull the sheet over the head of a person who dies but why? After a bad or scary experience or even facing a challenge we have an expression "shake it off" and we often will physically shake our body to get past the feeling of fear or anxiety or nervousness. Does that really make any sense?

Adam and Eve covered their naked bodies with leaves yet hid anyway so clearly the leaves didn't achieve the "covering" they were seeking.

Are you seeing where this is going?

Peter carries the most shame among the eleven. He was the one with the most bravado. He was the one who boldly declared I will stand by you even if the rest of them don't. I will die for you!" Yet it was Peter who went so far as to deny with cursing that he even knew Jesus.

The nakedness Adam and Eve felt was not a nakedness of body, it was a nakedness of soul. It was the feeling of being caught, of being completely exposed. Peter was in the same boat. ( smile emoticon ). He wanted to cover his shame and guilt yet he wanted Jesus. It's an amazing moment. Had shame held all the power Peter would have swam further out to sea. We are about to see that the grace, forgiveness, mercy, and love of Jesus trumps the shame and guilt of Peter. Perfect love casts out fear and even though Peter needed the security blanket of his tunic before he plunged into that water he still took the plunge.

It's so clear isn't it? Jesus will keep coming until our need exceeds our fear and His love conquers our shame. He loves us so much that He doesn't force Himself on us, He positions Himself where we can come to Him if and when we are ready.