21:9 Then, as soon as they had come to land, they saw a fire of coals there, and fish laid on it, and bread. 10 Jesus said to them, “Bring some of the fish which you have just caught.”
11 Simon Peter went up and dragged the net to land, full of large fish, one hundred and fifty-three; and although there were so many, the net was not broken. 12 Jesus said to them, “Come and eat breakfast.”

Bread and fish. Turns out the charcoal fire was not the only trip down memory lane that Jesus wanted to take them on. These men were spent. They had promised Jesus everything and delivered nothing. Twice He had visited them already offering grace and forgiveness but still the cloud of doubt, guilt, shame, and fear followed them like a London fog. 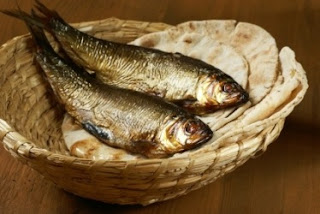 The bread and fish: Where did He get them? Of course this was not new. Jesus was always getting something from nothing. Twice at least He had fed thousands with a few loaves and fishes. In fact the more they gave Him the less people He fed. Flip the math and the less we give Him the more He can do. Both times His disciples had thought the task impossible. How could they feed so many with so little? What they had seen as the problem was precisely the point. It was impossible. Review the Bible Story. Abraham having a son with Sarah? Impossible. Jacob recovering from his shameful lying and under handedness? Impossible. Joseph rising to a position where his entire family would bow to him? Impossible. The Israelites escaping the bondage of Egypt? Impossible. Crossing the Red Sea? Impossible. The list is endless and the point always the same. If you trust Me I can and will do the impossible in you and for you.

We live in a world where we are only valued for what we can produce. Because of this the most vulnerable are cast aside. The challenge facing Jesus at that moment on that beach was a challenge He faces with humanity over and over again. "How can I convince them of their value to Me when they see no value in themselves?"

It's not a simple task. If He leaves us in the prevailing delusion that we can do anything and the power is within us we will ultimately discover the well is dry and crash. That is exactly what happened to Peter at that charcoal fire. All his grandiose bravado went up in smoke and he was left with his nothingness. Now Jesus has to take the shell of a man he now sees himself to be and make him realize that it's not the end of the Story. Peter and the others need to grasp that their lack does not negate or limit the power of God to turn that nothingness into a feast for thousands.

"Bring Me some of your fish. Bring Me what I supplied to you when you could produce nothing yourself. I want you to see and understand that I still plan to invest in you and make your nothingness into a ever flowing supply of food for the starving world around you."

See it's not really about bread and fish at all. It's about pouring Himself into the willing so that they I turn can pour themselves into the empty creating a chain of limitless supply to meet every need. The people of God could be the mist powerful force on earth. Only two things prevent it. Either we attempt to give from an empty well of promises and bravado backed by nothing of substance or we receive the true "goods" from God but hoard them to ourselves leaving us stagnant and repugnant and ultimately producing death.

We live in a world that believes two fundamental lies. One is that we only have value based on what we can produce. This leads to false bravado followed by the inevitable crash.

The second lie is that success is defined by what we get when the truth is that love and meaning and happiness are in what we give. Jesus gave Peter the fish and then asked for them back so He could in turn give them back to Peter. Giving produces life. Hoarding produces death. Loving the person makes them blossom into more than they ever imagined possible. Loving only what they can produce reduces them to nothing.

These men have come face to face with their own lack. Now Jesus is infusing them with new life, His love. He is investing where they wouldn't even invest themselves and the results will be amazing. Watch as the Story continues to unfold...
Posted by Pastor Dan at 11:07