21:11 Simon Peter went up and dragged the net to land, full of large fish, one hundred and fifty-three; and although there were so many, the net was not broken.

As a pastor I have often been asked questions about the Bible for which there are no answers. Most of the time they are details about characters in the Bible. Questions like "Did any of the disciples have children?" or "Does the Bible say anything about cremation?" The truth is the Bible is short on details and the stories are for the most part very brief. After all covering thousands of years of history in a single book affords little room for detail. 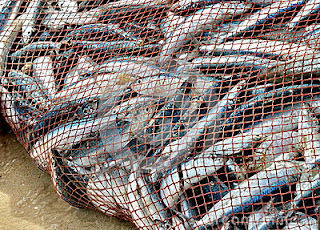 This being the case it always intrigues me when bizarre, seemingly unnecessary, and apparently meaningless details are included. Did John really need to tell us they caught 153 large fish or that the net didn't break? I spent some time this morning chasing the number 153 but I'm not into numerology nor do I believe God's Book was ever meant to be complicated. For that reason I took a step back and looked at it again. The number of fish is linked directly to the net and the fact it didn't tear. This fact is pointed out meaning they fully expected it to break but it didn't. They fully expected it to break because of the 153 large fish. The net wasn't designed for such a large haul. Logically the stress and pressure of the ordeal should have torn it.

Are you seeing where this is going?

Peter and the others have just been through an experience with Jesus that would have ended most relationships. The stress and pressure of ordeal was enough to tear them apart forever. Most civilizations treat treason as on offense punishable by death. The offense was so bad that Peter and the others didn't need Jesus to tell them they were done as His disciples. They just quietly went back to their old life on their own.

For me that is the lesson of the 153 large fish and the net that never broke. "The kingdom of heaven is like a net..." No matter how much we resist, flipping and flopping, and struggling to have our own way and trust in our own ways and ideas God continues to gather us in. His relentless, some would even say reckless love, is unperturbed by us. Not a strand of the net is even frayed. No matter how heavy the weight of the sins that so easily entangle us the net can handle it.

Jesus through the coal fire of purifying forgiveness and the bread and fish which represents His ability to bring something from nothing and now with the unbreakable net is surrounding all their senses with one clarion message. "I still love you. I still want you. I still have plans for you. Our relationship is not broken. You are still mine."

A final thought is this: A net can be seen as an instrument of deceit and force. Fish are caught unwillingly and taken where they don't want to go. However Jesus doesn't fish for men like that. He called the 12. They didn't have to come. He suggested they cast their net on the other side. They didn't have to listen or obey. They came to shore of their own free will.

God is not a God of force. He just wants us to know that the net of His love and grace is indestructible.
Posted by Pastor Dan at 08:24