21:12 Jesus said to them, “Come and eat breakfast.” Yet none of the disciples dared ask Him, “Who are You?”—knowing that it was the Lord. 13 Jesus then came and took the bread and gave it to them, and likewise the fish.
14 This is now the third time Jesus showed Himself to His disciples after He was raised from the dead.

Weird right? No one dared to ask "Who are You?" Because they already knew it was Him. Why would there be a desire to ask or that tidbit even mentioned if they clearly knew who He was? And how did they know Who He was if they couldn't tell by looking?

You will recall that when Mary met Him near the tomb she did not recognize Him until He spoke her name. When He came into the locked room to see the disciples for the first time they didn't recognize Him until He revealed His scars. The same was repeated for Thomas the 2nd time He came to visit the disciples. Now at this third encounter there still seems to be some question/uncertainty about His identity. When you factor in the other gospels it becomes obvious that Jesus does not look the same after His resurrection. In Luke He walks miles to Emmaus with two men who were followers of His, describing to them from the Scriptures all the references to the Messiah and His mission. However it wasn't until they invited Him into their home as a stranger and He sat down to eat with them that they recognized it was Jesus. In fact it was when he broke bread that they clued in to who He was. Did they see His scars when He raised His hands to tear the loaf? Had they eaten with Him enough previously that they saw in His mannerisms Who He was?

From all of this one thing is for sure. Jesus was different in physical appearance after He rose. This begs the question why? It is a question we either have no answer for or have not yet found the answer. I do have a theory though.

There is a theme through the Bible of the superficial versus the inner man. The prophet Samuel wrote thousands of years ago we look at the outward appearance but God looks at the heart. It was said in the context of a new king being selected from among the sons of Jesse to replace Saul. Saul had been chosen with enthusiasm because he was tall and handsome. He turned out to be a failure because the inner man didn't match the external packaging. 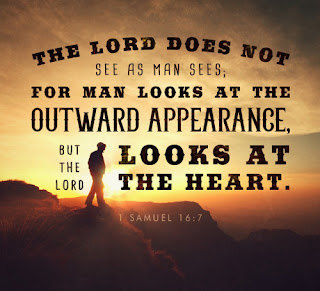 Samuel is called by God to select a new king from among the many sons of Jesse. Samuel goes from the oldest to the youngest and judging by appearances feels they are all suitable yet God said no to each of them. Finally Samuel asks if Jesse has any more sons. He confesses he has one more. He is young and not particularly tall nor handsome. By all appearances he has no attributes of a king. His name was David. He became the greatest human king Israel ever had. Man looks at the outward appearance but God looks on the heart.

Isaiah 53 tells us that Jesus the man born of Mary grew up to be nothing but ordinary or less. There was nothing about His appearance that drew people. He was not tall, dark, and handsome. Jesus was strong, tall, and handsome on the inside. People who took the time to listen to Him and spend time with Him recognized in Him a man like they had never "seen".

The resurrected Jesus looked different. Perhaps now He was tall, dark, and handsome. We'll find out for sure when He comes for us to take us Home.

This week I was asked (again) about jewelry. The Adventist Church has had a history of shunning or at least strongly discouraging the wearing of jewelry. Peter says we should be focused on inward beauty and not outward adornment. However Jesus said the Father put a ring on the finger of His prodigal son and that there will be crowns in heaven. Clearly jewelry isn't evil. Like with so many things we grasped onto a rule but forgot the principle.

Allow me to say this. The time for external beauty will come. God created beauty and there is nothing wrong with it. However I have two distinct sets of clothing. One for rough labour (gardening, mechanic work, woodworking etc...) and presentable clothes for when appearance trumps function. Right now we live in a war zone and until we are Home the beauty of our inner person is infinitely more important than the beauty of the car we drive, the house we live in, or the clothes/jewelry we wear.

When God has rescued us from sin and death and made us new creatures in Him people may take a second look but it won't be because we have on designer shoes or are driving a cool car. They will know we are His because we love as He loved. Then when this war called life on this earth is over Jesus will make our outside match the beauty He has already formed on the inside.